Myanmar military tortures a monk, a student and an artist

In humiliation, a monk was forced to hop like a fish. An accountant was shocked using electric probes. A baton was used to beat an artist in the head until he fell asleep. 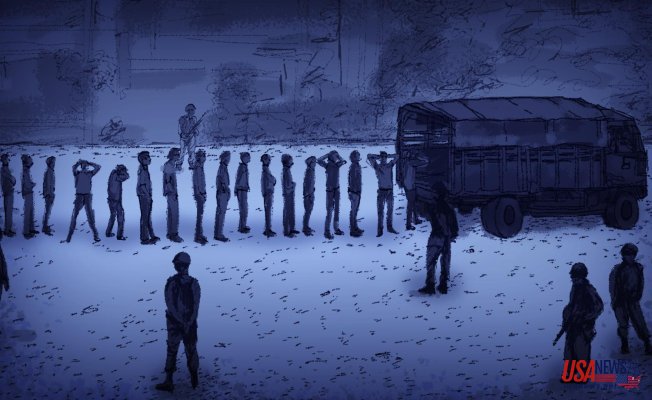 An Associated Press investigation found that the military tortures detainees in Myanmar since it took control of the government in February. The military also took thousands of young men and boys, used their bodies as terror tools and attacked medical personnel during a pandemic. More than 1,200 people have been killed by security forces since February. An estimated 131 of them were tortured to death.

Here are some more stories about prisoners who were abused by the military.

A 31-year old monk was shot in the head while running from military personnel. He was handcuffed, beaten with batons, and rifles. He was kicked in the back, chest, and head by security forces. To prove criminal intent, they also took photographs of the monk and other protesters holding gasoline bottles.

The soldiers made the monk change into civilian clothes and sent him to Mandalay Palace's torture center.

He said, "The interrogation camp at the palace was really like Hell."

They told him to jump like a frog. They took him to a room without a toilet. Prisoners defecated in plastic bags and urinated in a corner.

They had to lie down on the ground at night. They were shot with a slingshot if they raised their heads.

He says that prisoners were sometimes tortured, particularly when they were drunk. "They would also ask us why we were praying at certain times if they were drunk." They then shot us with the slingshot.

THE ACCOUNTANT: I COULD DIE HERE

The interrogation of a 21-year old accountant began at a police station. Soldiers kicked him in his arms, legs, and ribs and hit him in both the head and the back. He felt as if he were going to pass out. He was blindfolded, and he was driven to Yangon's 9-Mile Interrogation Center.

A soldier asked him if he was involved in the bombings and told him that there was a crematorium and morgue within the compound. The soldier grabbed the accountant by the neck and forced him to kneel. Later, other soldiers tied him up to the wall and beat his head.

He was kicked in the chest by soldiers who hit him with a PVC pipe, breaking it. He was only hit in areas that were hidden by clothes. He went black.

They dumped ice water on the head of the man to wake him up. They soaked him in ice water and shocked him with electrical probes.

He says, "I felt like I was going mad," "Then they zapped my second time and I was thrown out of the room again."

Only after his family had paid money to officials, he was freed from 9-Mile. He was taken to Shwe Pyi Thar, where he was interrogated by soldiers.

He was beat with a rubber baton by soldiers and kept in darkness for so long that his memory lost all sense of direction.

He was made to sign a confessional statement by them. He was released after his father paid more money.

He says, "I told myself I could die there ..... I kept thinking, How could they inflict such excruciating pain to other human beings?"

THE ARTIST: I TRY NOT TO HAVE ANY HOPE

A 21-year old artist was taken into custody by security forces during a demonstration and beat in the head with a baton till he fell asleep.

He awoke to hear a soldier saying, "Hey, kill these guys already." A second soldier also warned him that there were CCTV cameras nearby and so they started dismantling them.

The artist recalls, "They were about killing us." "This is it, you know?"

The local police arrived quickly and informed the soldiers that they could not kill the young men. The artist was then taken to Yangon's Shwe Pyi Thar interrogation centre, where he was kept for four days.

He says, "Once I reached the interrogation centre, I tried to not have any hope."

He was told by a police officer to get down and he did. The soldier asked him why he was still sitting, and beat him.

The air in the room was stale. He could hear the sound of people being beat and banging at night.

He says, "Whenever we heard the door open with a squeaking sound metal, late at night, from the back, the entire cell would be startled and wonder who was being interrogated." "Some people never returned."

He was released after four days in Insein prison.

THE STUDENT: IT'S VERY SYSTEMATIC

Along with other protestors, the 23-year-old Yangon student was detained on March 3.

The student said, "It's really really bad." "Especially for this COVID-time."

The military interrogated him on his involvement with the student union the second night.

He and three other prisoners were taken out of the prison at 7:01 a.m. the next morning. They ordered them to kneel and handcuff their hands behind their backs. Then they blindfolded them and put a hood on their heads. The officers tied a rope around the neck and body of the young man and kept it in place like a leash.

The soldiers forced the students to get into a vehicle and beat them. They drove an hour to the interrogation centre.

For three days, he was held at the interrogation centre. He was beaten by five officers the first night around 2 a.m. and told that if he didn't lie, they would take his case to the barracks, where the dogs live. He was put blindfolded, handcuffed, and taken out of the room.

He was then taken back to Insein where he witnessed officers slicing through tattoos of other prisoners.

He says that torture is very systematic. There is a pattern.

Insein was his home for four months. He talked to an elderly man who had been so severely beaten that he was completely blind in one eye.

He was released June 30th and spent two days with his family before fleeing to a new hideout.

THE SISTER: "THEY JUST TORTURED HIM AWAY"

The 22-year old man was at the shower around midnight when four military personnel arrived on motorbikes.

His mother, who was young and innocent, begged soldiers not to take her son. The soldiers told him that if he refused to go with them, they would shoot his family.

The man's sister claims that the men took him away and told his mother they would keep him there for a while.

His family spent the day searching for him. He was taken to a military base. Soldiers sent him food and clothing to the base. They also told him that he would be released within a few days if his family donated money.

The family tried to raise funds. The military informed the family the day before the young man was due to be released that he had suffered a stomachache and died in hospital.

Soldiers took the man's parents to the cemetary and showed them the smoke from his body's alleged cremation. They never showed the body to his parents.

"They just told us that he had been cremated already," his sister said.

The family requested a piece from one of the bones of the young man. They believe he was tortured by the military to death.