Galleries Videos CONTACT ADVERTISE
Girne 6°
clear sky
BUSINESS EDUCATION ENTERTAINMENT HEALTH POLITICS SCIENCE SPORTS TECHNOLOGY
08:11 Stick it to “The Man” at the Zero Trust Security Summit
04:37 What to Consider When Starting Your Own Business
10:17 Clover POS System for Dental Offices
06:14 How Mobile Technology is Revolutionizing the World of Poker
20:31 The Importance of Banks in Our Lives
05:46 Things to Consider When Hiring a Criminal Defense Lawyer
09:15 Couple T-shirts are ideal for spicing up relationships
09:01 Laser Tattoo Removal and Its Amazing Benefits
07:58 Consolidate your medical bills with a debt consolidation
19:48 Is your mind a certain people? Elina Tanskanen gives a task, which you...
BIST
122142
GOLD
300.183
USD
5.9403
GPB
7.7697
EUR
6.5530
Breaking News
Why Go for Physical Therapy and How to Find the Best Therapist
Close

Lin-Manuel Miranda owned Friday's Oscar rehearsals. He sang a tune from "La La Land," posed like John Travolta in "Saturday Night Fever," invoked a 1990s Billy Crystal Oscar monologue, and reprimanded his dad from the stage for having... 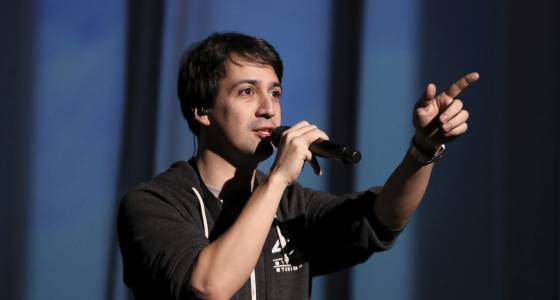 Lin-Manuel Miranda owned Friday's Oscar rehearsals. He sang a tune from "La La Land," posed like John Travolta in "Saturday Night Fever," invoked a 1990s Billy Crystal Oscar monologue, and reprimanded his dad from the stage for having his cellphone light on.

The creator of "Hamilton" joined Sting, Justin Timberlake and John Legend for a day of music rehearsals at Hollywood's Dolby Theatre Friday. Miranda is nominated for "How Far I'll Go" from "Moana." Timberlake is up for "Can't Stop the Feeling" from "Trolls." Sting will sing his nominated song from "Jim: The James Foley Story," and Legend will perform the two nominated songs from "La La Land."

Wearing a sweatshirt that read "Rehearsal is the best part," Miranda sang a few bars from "City of Stars" before his rehearsal began.

Later, he called out his dad from the stage.

"Luis Miranda," the 37-year-old Grammy, Emmy and Tony winner bellowed into the microphone. "Turn your light off. I can see it from here."

Lin-Manuel Miranda will become the youngest member of the EGOT club if he takes home the Oscar on Sunday. He's set to introduce 16-year-old Auli'i Cravalho at the show, who voiced the title character of "Moana" and will perform his nominated song.

Auli'i Cravalho is seen during rehearsals for the 89th Academy Awards on Friday, Feb. 24, 2017.

Auli'i Cravalho is seen during rehearsals for the 89th Academy Awards on Friday, Feb. 24, 2017.

A novice actress discovered by chance in her hometown of Honolulu, Cravalho repeatedly ran through the tune with a confidence and charm that belie her age and inexperience.

The starlet even smiled as she sang, completely undaunted until she noticed Meryl Streep's seat-saving placard in the theater's front row.

"There's my role model in life right there," Cravalho said.

She confessed her concerns to Miranda after the rehearsal. The banner-wielding dancers behind her: did they cause too much of a breeze in her hair?

"It's like a bespoke Beyonce fan," Miranda said in comfort.

Earlier Friday, Legend sat behind a grand piano on the Oscar stage. The last time he performed here, he went home with an Academy Award, winning best original song for "Glory" from "Selma."

This time, Legend rehearsed a medley of tunes he didn't write, but the composer of the nominated songs from "La La Land" was by his side to offer guidance.

John Legend, left, and composer Justin Hurwitz are seen during rehearsals for the 89th Academy Awards on Friday, Feb. 24, 2017.

John Legend, left, and composer Justin Hurwitz are seen during rehearsals for the 89th Academy Awards on Friday, Feb. 24, 2017.

Legend will perform a newly arranged medley of "City of Stars" and "Audition" by the film's triple-nominated composer, Justin Hurwitz, who kept his sheet music notes under his arm throughout Friday's rehearsal.

"It's really cool to mess up on this stage," Legend said with a smile after striking an errant chord on the piano. Hurwitz coached the Grammy winner between takes.

Set against a backdrop that moves from a Los Angeles sunset to a starry night sky, choreographer Mandy Moore led a team of dancers through a routine that evokes the timeless ballroom moves Emma Stone and Ryan Gosling perform in the film. Two dancers even appear to float through the sky during the number.

"It's gonna be good, I promise," Moore told Hurwitz.

"It looks beautiful," he said nervously.

Co-lyricist Benj Pasek watched proudly from a seat in the theater.

"I am freaking out," the 31-year-old Oscar nominee said, adding that he brought his mother along to rehearsals.

"She's becoming best friends with all the people who run the Oscars," he said.

Sara Bareilles is seen during rehearsals for the 89th Academy Awards on Friday, Feb. 24, 2017.

Sara Bareilles is seen during rehearsals for the 89th Academy Awards on Friday, Feb. 24, 2017.

Sara Bareilles, who will sing for the show's In Memoriam tribute, had a brief Broadway-style moment with Miranda and "Hamilton" director Tommy Kail. The stage stars attempted to present the singer with a bottle of water, which she dramatically shunned, until embracing the Tony winners seconds later.

The 89th Academy Awards will air Sunday on ABC.