NEW YORK, NY (AP) -- Since two years ago, hospitalizations and coronavirus cases have been widely used as barometers for the spread of the pandemic. 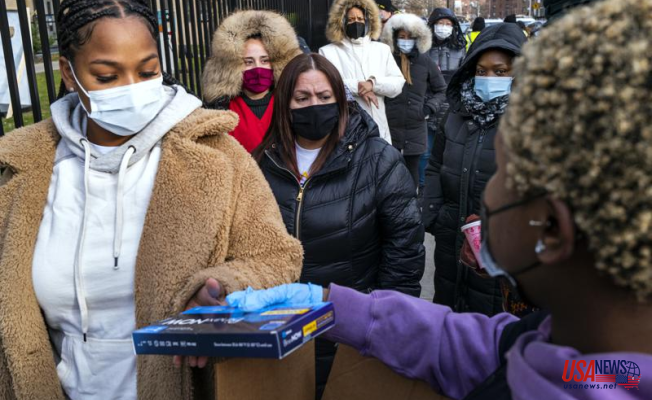 The omicron waves are making statistics a mess, and news organizations have to rethink how they report these figures.

Over the holidays, the number of cases increased dramatically. This was expected given the new transmissible variant.

These counts are only representative of what health authorities report. These numbers do not include people who have tested positive at home or those who are unaware they are infected. Reports of cases can also be delayed by holidays and weekends.

You can't add all these numbers together, so the case counts would be significantly higher.

The Associated Press recently instructed its reporters and editors to stop focusing on case counts when reporting about the disease. This means that stories about the disease should not be limited to a single country or state. It has become difficult to verify this claim.

There has been a greater caution when using official case counts in the media.

A Monday NBC News story about the rising number of COVID cases was based on a week-long average of case counts. The Tuesday story was simply about a "tidal waves" of cases.

CNN displayed two-week average case counts during its coverage of Tuesday's Senate hearing with health professionals. MSNBC used many measurements, including a list of five states that had the highest reported numbers in the last three days.

The Washington Post's website's "Guide to the Pandemic" used a seven day average of cases. It then compared it to Tuesday's last Tuesday, which showed a 56% increase. The New York Times included both a daily count and a trend over two weeks in both deaths and cases in its online chart.

Wu stated that many news organizations are pondering how to best use statistics during the omicron surge. There aren't any easy answers.

Wu stated, "It's the way journalism works." We need the data. We must show receipts to the readers. However, I do my best to make it a smooth process.

Some consider hospitalization and death rates to provide a better picture of COVID-19’s current impact on society. However, these numbers have been questioned in recent times. Many hospitalizations are accidental. People are admitted for other reasons, and they are shocked to discover that they have COVID. Tanya Lewis is senior editor for Health and Medicine at Scientific American.

Despite the imperfections, case counts should not be ignored, said Gary Schwitzer, a University of Minnesota School of Public Health instructor and publisher of HealthNewsReview.org, which monitors health coverage in the media.

These numbers show trends and give an indication of areas that are being affected the most or where the surge may have reached its peak, he stated. They can also predict wider societal impacts such as where hospitals will be overwhelmed or where workers will be in short supply.

Schwitzer stated that these stories may not be told well if they are limited to hospitalizations or deaths.

This is a point that AP's internal guidance emphasizes.

Hoffner stated that "they do have value." "We don’t want people to forget about case counts."

Some journalists and public health professionals believe that the current surge, as painful as it may be, could bring good news. This could indicate that COVID-19 will become an endemic and manageable disease, according to Ashley Wu and David Leonhardt in The New York Times.

Lewis stated that the lessons of the past two years are about the dangers in making predictions.

She said, "We've been amazed time and again." We don't know everything about how the pandemic will unfold. "We need to remain humble and open-minded about where things are heading."