Looking Back: There's Monkey Business In The Hatfield House (June 18, 1959)

This story appeared in the pages of the St. Petersburg Times on June 18, 1959. What follows is the text of the original story, interspersed with photos of the event taken by Times staff photographer George Trabant.11 Months AgoMore than a Year ago8 Months... 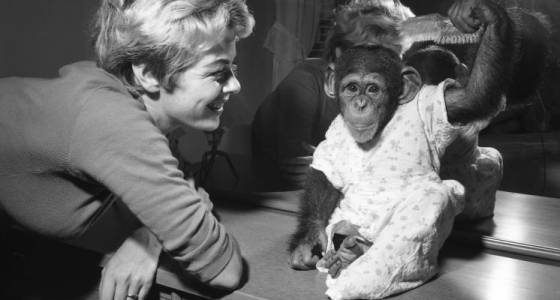 This story appeared in the pages of the St. Petersburg Times on June 18, 1959. What follows is the text of the original story, interspersed with photos of the event taken by Times staff photographer George Trabant.

Mrs. Barbara Hatfield is a young mother with a problem. She can't hire a baby sitter.

Sound like "monkey business?" You're right! Up until three months ago she didn't have any problems getting a sitter for her two sons, Glenn, 8 ½, and Gary, 5. Then Jamie became a member of the family.

BREAKFAST TIME IS REALLY A 'THREE RING' CIRCUS for Mrs. Barbara Hatfield, who not only has to serve sons Gary, 5, and Glenn 8 ½, their morning meal, but must see to it Jamie gets fed without any "monkeying around."

Since Jamie joined the Hatfield household there hasn't been a dull second. Mister James is a chimp, and a demanding one at that!

Like a small child, Jamie thrives on attention. When left alone he screeches 'till someone comes to pick him up.

'BAREFOOT BOY' AT HEART at 9-months, Jamie knows to get shoe off he must untie string first.

Mrs. Hatfield and Jamie became "attached" (he threw his arms about me and wouldn't let go) to one another while she was touring a wild animal farm in South Florida.

So he came home.

"Rearing small boys and raising a chimp is about a 50/50 proposition," says the attractive Barbara Hatfield.

In playing mother to a chimp, Barbara finds the biggest problem is Jamie's devotion. "He wants to see me every second, if I leave the room for even a few minutes he'll scream at the top of his lungs, then throw himself on the floor in a rage of temper," laughs Barbara as she adds, 'ever tried to do your housework with a chimp clinging to you?"

Storytime is a family affair with even the ocelot, Kim "listening." It's probably a jungle adventure!

At 9-months' Jamie is more advanced than a child the same age. He gets three meals a day, is wild about fresh fruits and marshmallows. Balks at his daily bath and will do anything for attention.

To order reprints, license or download any image from this gallery, please visit the Times image archive.