Lin-Manuel Miranda even sings karaoke better than you do

With the Oscars around the corner and much of Hollywood still focused on the twists and turns of the presidency of Donald Trump, here's what's new and interesting in entertainment and the arts: Los Angeles, what were you doing Thursday night? Unless the... 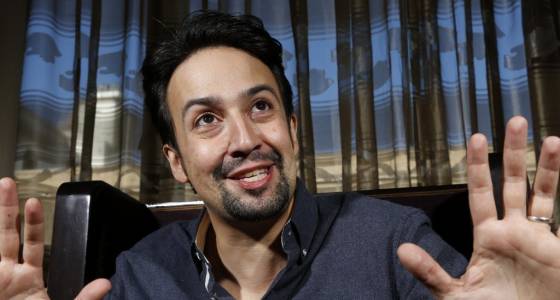 With the Oscars around the corner and much of Hollywood still focused on the twists and turns of the presidency of Donald Trump, here's what's new and interesting in entertainment and the arts:

Los Angeles, what were you doing Thursday night? Unless the answer was "singing karaoke with potential EGOT winner Lin-Manuel Miranda," you definitely missed out.

Miranda, ostensibly in town for Sunday night's Academy Awards, dropped by the Lost Knight pub in Echo Park for the premiere party for the new Seeso series "My Brother, My Brother and Me" and sang karaoke with enthused revelers.

Seeso is a subscription streaming service owned by NBC that features comedy content.

"My Brother, My Brother and Me" is a new series — featuring Justin, Travis and Griffin McElroy — that started as a podcast and includes the brothers humorously answering questions posed by listeners or found online.

Miranda previously appeared on an episode of "MBMBaM" and even composed a song for the occasion. "Ghost Horse" is about — you guessed it — a horse that is a ghost.

Now that everyone's on the same page, we can tell you that Miranda jumped at the chance (literally) to help out a crooner performing the opening number to his hit musical, "Hamilton," leaping on stage just before his musical cue.

Miranda also had no problem rocking the mic on his own, offering his take on the R. Kelly classic "Ignition (Remix)," which is just as delightful as it sounds.

Watch the videos and regret all your Thursday night social choices below.