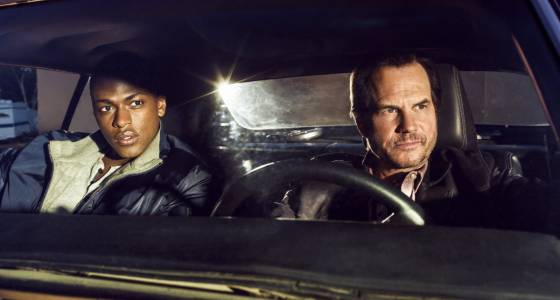 The Moment: The growling

As his straitlaced trainee Kyle Craig (Justin Cornwell) watches, rogue police detective Frank Rourke (Bill Paxton) rifles through the pockets of a dead Yakuza gangbanger. Someone warns Frank that the corpse “could be a biohazard.”

“My blood is eight parts whiskey and I date a hooker,” Frank growls, and keeps rifling.

What luck! Frank finds a peeled beer label — and happens to know it’s from a beer that’s “$1,000 per bottle.” And “there’s only one bar in America that sells it.” And it’s nearby.

At the bar, Frank’s luck holds. He spies a thug who leads him straight to the top-secret head of the Yakuza. But first, Frank confronts a slimy G-man: The Yakuza were really after Slimy, weren’t they? And he lied about that, didn’t he? “National security my ass,” Frank growls at him. “More like job security.”

Obviously, I didn’t love this series’ self-seriousness or Paxton’s choice to demonstrate Frank’s corrupt nature by growling. Each. Word. Separately. Now, after Paxton’s untimely death last Saturday (from complications postsurgery), I don’t know what the powers that be are going to do with the nine episodes they apparently have in the can.

But as I recalled the many wannabe tough guys Paxton played, I realized that I always liked his “wannabe” better than his “tough.” His characters were trying to pass as macho in a world that rewards machismo and Paxton showed us their (and perhaps his) ambivalence about that.

Training Day airs Monday at 10 p.m. on CTV and Thursday at 10 on CBS, and is available on demand. Johanna Schneller is a media connoisseur who zeroes in on pop culture moments. She usually appears Monday through Thursday.