Justin Timberlake opened the 89th Academy Awards by putting the good soul in the crowd's feet with a performance of "Can't Stop the Feeling!"Audience members, including Timberlake's wife Jessica Biel, got in on the action, clapping along to the... 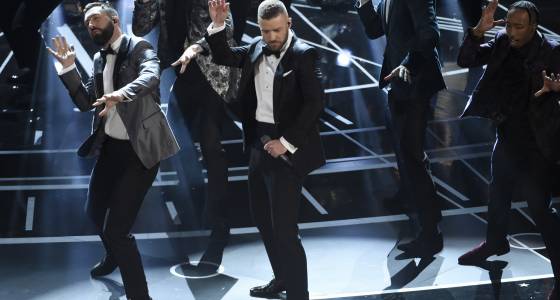 Justin Timberlake opened the 89th Academy Awards by putting the good soul in the crowd's feet with a performance of "Can't Stop the Feeling!"

Audience members, including Timberlake's wife Jessica Biel, got in on the action, clapping along to the Timberlake hit from the animated film "Trolls." He also sang a line from Bill Withers' famous tune "Lovely Day" before introducing Oscar host Jimmy Kimmel.

"Can't Stop the Feeling," from DreamWorks' "Trolls," is up for best original song at this year's ceremony, and is one of five nominated songs that will be performed live during the show. Lin-Manuel Miranda will perform "How Far I'll Go" from "Moana" in a duet with Auli'i Cravalho; Sting will perform "The Empty Chair" from "Jim: The James Foley Story"; and John Legend will perform "City of Stars" and "Audition (The Fools Who Dream)" from "La La Land."

"Can't Stop the Feeling!" was written and performed by Timberlake, who voiced the lead character of Branch in "Trolls." Though the Oscar nomination is the first for Timberlake, "Cant Stop the Feeling!" recently won the Grammy for best song written for visual media, as well as the People's Choice Award for favorite song in January.

Justin Timberlake performs songs from best original song nominee "Can't Stop the Feeling," from "Trolls" at the Oscars on Sunday, Feb. 26, 2017, at the Dolby Theatre in Los Angeles.

Justin Timberlake performs songs from best original song nominee "Can't Stop the Feeling," from "Trolls" at the Oscars on Sunday, Feb. 26, 2017, at the Dolby Theatre in Los Angeles.

"Trolls" director Mike Mitchell told Variety that before Timberlake came on board with "Trolls," he had spent copious amounts of time distressed over what song to place in the film's third act, a particularly essential moment in the film's emotional arc.

Of the song, Timberlake says "It's the sort of thing where you realize, 'Man, there's nothing wrong with putting some good vibes in the world. Like, 'Hey, you over there trying hard to act like you don't care, that sounds exhausting.'"