In a major break for Bill Cosby, a judge ruled Friday that just one of the comedian's multitude of other accusers can testify at his trial to bolster charges he drugged and violated a woman more than a decade ago.The 79-year-old TV star is set to go on trial... 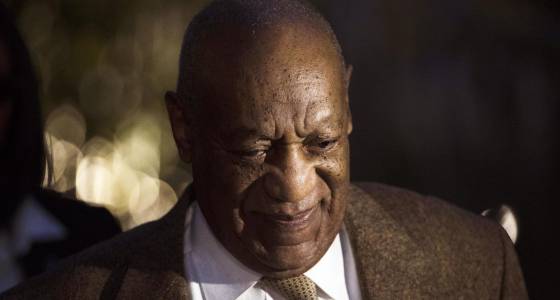 In a major break for Bill Cosby, a judge ruled Friday that just one of the comedian's multitude of other accusers can testify at his trial to bolster charges he drugged and violated a woman more than a decade ago.

The 79-year-old TV star is set to go on trial in June, accused of sexually assaulting former Temple University employee Andrea Constand at his suburban Philadelphia home in 2004. Prosecutors wanted to put 13 other women on the stand to show that his alleged conduct was part of a distinct pattern of behavior.

Montgomery County Judge Steven O'Neill disallowed all but one of those women, saying in a one-page ruling that he carefully weighed the possible value of their testimony against the potential prejudice to Cosby.

The one witness who can testify says the comic drugged and assaulted her in 1996 at a Los Angeles hotel.

Cosby's lawyer had no immediate comment, but the actor himself re-tweeted news stories on the ruling, adding the hashtags "#KeepWatching" and "#PayAttention."

With O'Neill's ruling, the trial will now rest more heavily on Constand's credibility.

PHOTO GALLERY: Bill Cosby to stand trial in decade-old sex assault case at the Montgomery County Courthouse on Tuesday, May 24, 2016, in Norristown, Pa.

"There is an obvious value to the prosecution when you have numerous accusers. That alone adds tremendous weight to the case," said lawyer Joseph McGettigan, a prosecutor in the Penn State sex abuse scandal.

The ruling could also shave weeks off the trial.

Cosby, who is free on $1 million bail, could get 10 years in prison if convicted. He is expected in court again Monday to ask that the jurors be selected from another county because of heavy pretrial publicity.

Prosecutors compiled the list of 13 potential witnesses from the nearly 50 women who have come forward in recent years to say they were drugged and molested — a barrage that destroyed Cosby's good-guy reputation as the star of TV's "Cosby Show" in the 1980s.

His lawyers objected to the testimony about "prior bad acts," saying that in some cases the sex was consensual, while others involved former models and actresses falsely accusing Cosby to gain money or attention.

His attorneys also argued that some of the allegations were so vague — with some of the women unsure of when the alleged encounters even took place — that it would be impossible for Cosby to defend himself.

While the ruling is a victory for Cosby at his trial, it could deprive him of grounds for appeal if he is convicted. In 2015, a Pennsylvania appeals court threw out a Roman Catholic Church official's conviction because the jury was allowed to hear from 23 priest-abuse victims who were not directly part of the case.

"It's the best of times and the worst of times for Cosby. It gives the defendant the opportunity to try the case that should be tried, the lone accuser," said defense lawyer William J. Brennan, who was involved in the church case. "If it doesn't go his way, he probably is limited on appellate issues. However, I'd take this, hands down, over the alternative."

The ruling is one of two key pretrial issues in the case. The judge earlier ruled that the jury can hear Cosby's damaging testimony from Constand's 2005 lawsuit against the comedian.

Cosby's deposition runs to nearly 1,000 pages and covers a string of extramarital liaisons dating to the 1960s. It was the release of the sealed testimony in 2015 that led prosecutors to reopen the case.

Constand told police he gave her three unmarked pills and then penetrated her with his fingers as she drifted in and out of consciousness. Cosby has said the sexual contact was consensual.

The additional accuser who can testify worked for one of Cosby's agents and had known the entertainer for six years when he invited her to lunch at his bungalow at the Bel Air Hotel to discuss her acting ambitions.

She said he was in a robe and slippers when she arrived and offered her wine and a pill that she consumed after he assured her it was safe. She said he then sexually assaulted her on his bed.

Among the other accusers who won't be allowed to testify, one said she was an aspiring actress when Cosby assaulted her at a home near Reno, Nevada, in 1984. Another said Cosby drugged and assaulted her in the late 1960s after befriending her and her 9-year-old son.

A WIN FOR COSBY

•Prosecutors wanted to put 13 other women on the stand, not including former Temple University employee Andrea Constand, to show a distinct pattern of behavior.

•Montgomery County Judge Steven O'Neill disallowed all but one of those women, ruling it potentially could be prejudicial to Cosby.

•The case now hinges more on Constand's credibility and not the pattern of behavior, experts say.