When Joi McMillon was a junior in high school, she really wanted to be a journalist for the Orlando Sentinel. Even though her brother moved from Florida to Los Angeles to be an actor, being in the film industry was just a fleeting idea. But during a tour... 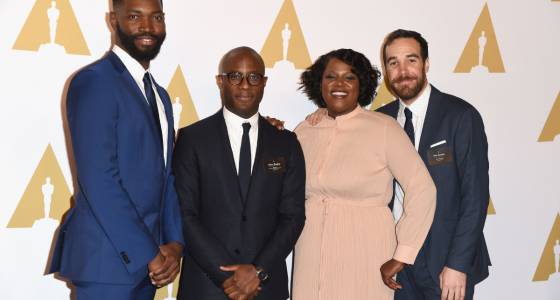 When Joi McMillon was a junior in high school, she really wanted to be a journalist for the Orlando Sentinel. Even though her brother moved from Florida to Los Angeles to be an actor, being in the film industry was just a fleeting idea. But during a tour of Universal Studios, she stumbled upon a guy using the program Avid to edit an episode of Animal Planet. She was instantly mesmerized — and sold. She also wanted to be an editor.

Once she returned home, McMillon began researching film schools, eventually settling on Florida State. It was there that she met director Barry Jenkins and film editor Nat Sanders. And the rest is history, literally, now that McMillon, working with Jenkins and Sanders on Moonlight, has become the first black woman ever nominated for the editing Oscar.

The nod is especially notable considering the Miami-set coming-of-age tale about a black boy struggling with his sexuality is McMillon’s first job as a lead editor —after more than 10 years being second on editing teams. But if the Academy Award nomination is any indication, that’s more a comment on the barriers to growth for black women in the below-the-line role of editing and less her talent.

Why Moonlight could win Best Picture

Of McMillon’s nomination, Jenkins commented last month: “I love Joi like a sister, and I respect her work. It makes me very proud of the work she did to see that I’m not the only one. Clearly the academy respected the work she did as well.”

The Los Angeles Times spoke with McMillon — who has paired with her co-nominee, Sanders, once more on Destin Daniel Cretton’s upcoming The Glass Castle and has already completed her first solo editing gig on Janicza Bravo’s Lemon — about making history, her start in reality TV and the importance of mentorship.

What was your first editing job in the industry?

My first part on an editorial team was as night assistant editor on The Surreal Life, Season 3 with Flavor Flav and Brigitte Nielsen. It’s so funny because I remember working on that season, having only been in L.A. four or five months, thinking this is what’s going to kill reality television. I couldn’t have been more wrong. My first time actually cutting something was a teaser for Beauty and the Geek.

How was the transition from reality TV to film?

It’s a tough one to make. My goal was to only be in reality television to get my 100 days so that I could apply to the Motion Picture Editors Guild and get in the union and start working in features. But I ended up staying two and a half years. One of the editors I met put me up for The Sarah Silverman Program, which was scripted. Then I was bold after one screening and talked to an editor, Paul Trejo, after watching Green Street Hooligans, and told him I loved how he cut the movie. He said we should meet for coffee and go over my resume. Two months later he had handed my resume to Terilyn Shropshire, and she hired me on Talk to Me as an apprentice editor. That was my first feature.

Was it difficult being a black woman, in terms of getting a foot in the door?

I remember applying to jobs on Craigslist and Mandy.com thinking, “This is my job. This is the one.” And then no one calls you. I know how disheartening that is, so I’ve been a big advocate for people coming up behind me, sending me their resumes and putting them in contact with people for jobs. A lot of times it’s about who you know. I think that’s the hard part when people are coming out here to break into below-the-line (jobs). These groups are so specific, almost like cliques, so literally once you meet the right person, it’s a whole new world for you.

The hard jump for me was moving from first assistant editor to editor. Everyone kept saying, “You don’t have the right credits or no feature film credits.” “You’ve done a lot of Tyler Perry movies.” I just wasn’t getting the job.

Moonlight was your first lead editing role on a feature. How did it happen?

I cut a short for Barry called Chlorophyl — working as a first assistant editor, I cut a ton of stuff on the side. I then started working with Nat Sanders, who cut Barry’s Medicine for Melancholy. We did the first season of Togetherness, and then we were on the second season of Girls when Moonlight came. It didn’t have a ton of time, post (production)-wise, so Barry and Nat asked me to co-edit. I was prepared to work on it in any role, but when they said co-editing, I said, “Sign me up!”

What’s a lesson you learned on Moonlight that you’ll take to next projects?

I think one of the lessons I learned was allowing the footage to speak to you. Sometimes as an editor you’re trying to pace things up to keep the audience engaged, but we learned to just allow moments to breathe and allow the audience to become acquainted with the surroundings. When we were cutting the diner scene, I was slightly nervous that we were lingering too long, but a lot of people tell me that they love being in that diner. You have to trust your instinct and your gut. Barry would always say, “Don’t break it. It feels good.” You’ve got to listen to that feeling.

What’s a trick of your trade that the audience may not realize is necessary?

Slipping lines into people’s mouths. We can take audio from a different take.

Do you have a mentor in the industry? Are your mentoring someone?

I have a few mentors. Maysie Hoy, who I worked with for seven years. She has cut 15 Tyler Perry movies, and I worked with her for nine of them. I still keep in touch with Terilyn Shropshire, though we’ve only worked together once. Coming up behind me are three female black editors that I’ve helped connect with jobs. One’s doing a Marvel pilot, one’s on Transformers and another is working with Ava (DuVernay) on A Wrinkle in Time.

What advice do you have for people of diverse background who want to edit?

I would say don’t hesitate to reach out. Editors are not getting a ton of fan mail. But we love to help out other people. I can’t speak for all editors, but all of the ones I reached out to, they responded and offered to have me come into their cutting rooms. Back in the day, it used to be a whole lot easier. Now it’s a little bit harder to get in touch, but once you do, it’ll be worth your while.

And, since actors always get this question, we have to ask, what are you wearing to the Oscars?

I’m wearing a dress by Tadashi Shoji. I’m actually wearing (Tadashi Shoji dresses) to the Spirit Awards and the Oscars.