The Show:Genius, Season 1, Episode 2 The Moment: The meeting of mindsUniversity student Albert Einstein (Johnny Flynn) has met his match: Mileva Maric (Samantha Colley), the only woman in his physics program and the only person to outscore him in math. He... 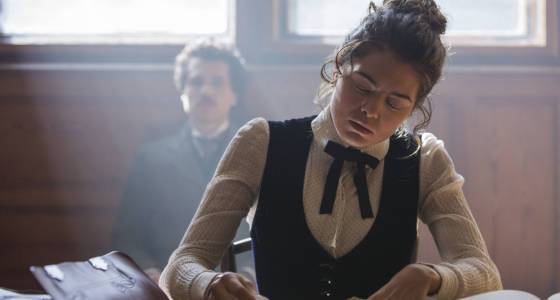 The Moment: The meeting of minds

University student Albert Einstein (Johnny Flynn) has met his match: Mileva Maric (Samantha Colley), the only woman in his physics program and the only person to outscore him in math. He wins her over by saying the exact thing they both long to hear: “I’m head over heels in love with your mind.”

Now, in a scene of perfect contentment, she lounges on the floor in her chemise, a book open in her lap; he lies on his back staring at the ceiling and they postulate ways that molecules might behave. (Here in the 1890s, they’re still theoretical.)

Their eyes meet. She crawls toward him. He takes her in his arms. “Isn’t it a miracle?” he breathes. “So many of us, millions and millions. However did we find each other?”

This 10-hour miniseries from producer/director Ron Howard is NatGeo’s first foray into scripted fare; its free preview, on now, continues just long enough to get you hooked.

Howard has a soft spot for thorny geniuses: Apollo 13, A Beautiful Mind, Frost/Nixon, Rush. He loves celebrating their stubborn individuality and he hits the motherlode with Einstein (played with his customary twinkle by Geoffrey Rush when the time jumps to 1930s Germany).

It’s especially great that this series gives Maric her place in history. She and Einstein married, had children and divorced. Science disagrees whether she co-developed some of his theories, but this episode does more than suggest the possibility: it dramatizes the loneliness of genius and the relief of finding a fellow beautiful mind.

Genius airs Tuesday at 9 p.m. on the National Geographic Channel. Johanna Schneller is a media connoisseur who zeroes in on pop-culture moments. She usually appears Monday through Thursday.