She’s not an actress. She doesn’t sing. In the sphere of power-spouses, she’s perhaps not even the most powerful wife-of.And, yet, there goes Chrissy Teigen, about to complete the full awards season relay as February swans to a close.... 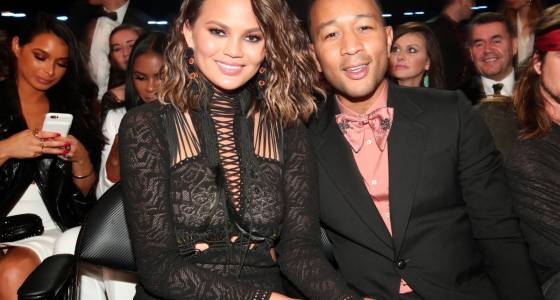 She’s not an actress. She doesn’t sing. In the sphere of power-spouses, she’s perhaps not even the most powerful wife-of.

And, yet, there goes Chrissy Teigen, about to complete the full awards season relay as February swans to a close. Front-and-centre at the Golden Globes (where she and soulful hubby John Legend were captured on live TV sitting on the red carpet as part of a let’s-chill stunt), and then marvelously close-up-and-personal at the recent Grammys, the stunner is confirmed to be going along, yet again, to next Sunday’s Academy Awards. La La Land’s Legend will be performing at the show, after all.

Viola Davis? Emma Watson? Et tu, Katy Perry? One and all have had to cede at least some camera time to the famous-for-being-famous-for-being-famous Teigen, whose Q rating in showbiz has been inching for some time, but whose troika of the season’s biggest awards shows has been nothing less than a master-class for this current era of social media-enabled fame-bloom.

“Chrissy is essentially a swimsuit model who understands the internet,”

is how one editor summed up the ubiquitous pop culture presence, putting a not-so-fine line on Teigen’s origin story.

“She got her start in the Sports Illustrated swimsuit issue, but became ‘known’ for being sassy on Twitter.”

Fourteen-million-plus followers later — if you combine her haul on Twitter, Instagram and Snapchat — 31-year-old Teigen doesn’t exactly help to disabuse of that explainer.

Reared in Seattle — the daughter of a Thai mother and Norwegian dad — her “model” days long ago got usurped by her profession as “personality.”

Something she’s managed — I note — with a boldface marriage, yes, and a snarky cool-girl vibe on social media, but without — notably — the rigmarole of a reality show/sex tape/“momager” (the textbook Kardashian route).

She is, however, very much pals with at least a Kardashian or three. Kim hosted Chrissy’s baby shower, for instance, a little while back — confirming the extent to which Teigen has emerged as a bridge between the old-school class affairs like the Oscars and the new-celebrity economy made of “likes.”

Walking the tightrope of disclosure, and social media, is an art form, and in that regard, Teigen is a pro. Just one of the ways she’s ascended up on the celebrity pyramid, one might argue. Take her pregnancy, in 2016, during which the yummy mummy turned into a veritable template for millennial birthing.

Cannily, she came out with a cookbook while she was with child — called Cravings, no less. Amazingly, Teigen’s cookbook was in the works some time before she was pregnant, her yen for food being quite well-documented, especially for an erstwhile Sports Illustrated cover girl (true story: she never met a mega burrito she didn’t like).

Rolling with the genius media narrative that is model-who-actually-eats — the book actually has won over many serious foodies, and been touted for its cozy un-Goop-ness — her pregnancy further cemented her “brand.”

Pre-baby, there was, for instance, oodles of press about her having navigated her entire pregnancy without a single piece of so-dubbed maternity wear. Post-baby, there were carefully dropped confessions, for instance, the revelation she comes from a stretch mark-prone family, and was taking the matter in her own hands by slathering herself with a $340-a-bottle La Mer The Concentrate.

Her biggest coup d’etat, however? Well, as previously alluded, it’s her cunningness and tell-it-like-it-is-ness. In addition to not being overly cautious or oppressively diplomatic, like so many celebs these days, she’s really funny.

The kind of gal who will post, “Would never be a Scientologist, but offended never to be asked” — but also, in the micro-climate of Donald Trump’s Twitter, is now most famous for her clap-downs on him. When the president whined recently about leaks in the intelligence community recently, Teigen quipped back, “This is what happens when your staff hates you. Beyonce’s staff are more leakproof than yours.”

Similarly, when the president tweeted about keeping “evil out of the country,” Teigen immediately struck back, “What time should we call your Uber?” Amazingly, Teigen has been going after Trump for years — long before the presidential race, and going back to his birther crusade against Obama. She’s no tweeter-come-lately.

Celebrity abhors a vacuum, and Teigen seems to be filling it, as demonstrated by the torrent of stories written about her almost daily in the fame-press, be it the positively quotidian — “John Legend Helping a Tipsy Chrissy Teigen Remove her Jewelry is Everything,” blasted a Glamour headline recently — to the we-didn’t-see-this-coming announcement last week that she was forming a “book club” on Twitter with her pal, Kim . . . and, well, “everyone’s invited!!!” The first book selection? Betty Eadie’s Embraced By The Light. (Watch out, Oprah!)

Relationship sage? That is perhaps Teigen’s greatest contribution to the culture. First meeting her love on the set of one of Legend’s videos, with whom she “hooked up” with at that time, she later revealed that she left him alone for a while. “I played it cool for a long time,” she’s said. “Never once did I ask, ‘What are we?’”