Ruth Negga, dripping in responsibly sourced rubies with a custom Valentino gown to match, accessorized with something extra Sunday on her first Oscar red carpet as a nominee -- a blue ribbon in support of the ACLU.The ribbon popped up on others walking the... 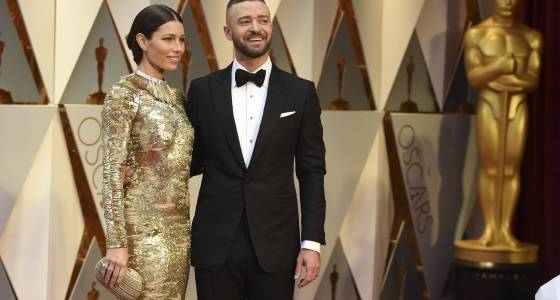 Ruth Negga, dripping in responsibly sourced rubies with a custom Valentino gown to match, accessorized with something extra Sunday on her first Oscar red carpet as a nominee -- a blue ribbon in support of the ACLU.

The ribbon popped up on others walking the red carpet, including Lin-Manuel Miranda.

She gave kudos to the civil rights group for helping the real "Loving" couple as they fought their way to legal marriage as a mixed-race couple. And Negga shouted out her home country, Ireland, poised in her red tiara and statement earrings.

Her gown was long-sleeved with a high lace collar in a bright red that can be tricky on red carpets. As for the ceremony at the Dolby Theatre in Los Angeles, Negga planned to enjoy her moment: "My win is my nomination."

Negga's little ribbon popped up elsewhere on the red carpet, including the lapel of Lin-Manuel Miranda, who noted his tuxedo came from Yonkers, New York, the same shop where he got his high school prom tux in 1998.

In Champagne: Felicity Jones, who wore a princess look that fell above the ankle.

Miranda, a song nominee, choked up a bit as she was serenaded by "Hamilton" cast members, including some Schuyler sisters.

"I hate you for making me cry before the Oscars have even started," he laughed, accompanied by his mom, Luz Towns-Miranda, who also donned the blue ACLU ribbon.

Hailee Steinfeld, a presenter, walked in a pleated back ruffle couture gown in a floral design with a long, sheer train, from Ralph & Russo. She's been a recent person-of-interest on red carpets. This time, her hair was up and she let her bare shoulders speak volumes.

Who slayed in trendy velvet? Presenter Taraji Henson, in off-shoulder deep blue by Alberta Ferretti and a diamond necklace perfect to show off her decolletage. She looked every bit the movie star with a high side slit. Her "Hidden Figures" co-star, Olivia Spencer, also went off the shoulder in a feathery lavender gown by Marchesa.

Ave Duvernay, the creator of the film "13th," wore high-neck, long-sleeved gray, pleats providing a bit of a bustle effect.

Chrissy Teigen joked with husband John Legend on the carpet, dressed in white Zuhair Murad Couture with gold embroidery and a dramatic cape. Another favorite carpet couple, Jessica Biel and Justin Timberlake, chatted amiably -- he in a Tom Ford tux and she in a slinky KaufmanFranco textured gown with a statement gold and silver collar adornment that lent the appearance of metallic fringe.