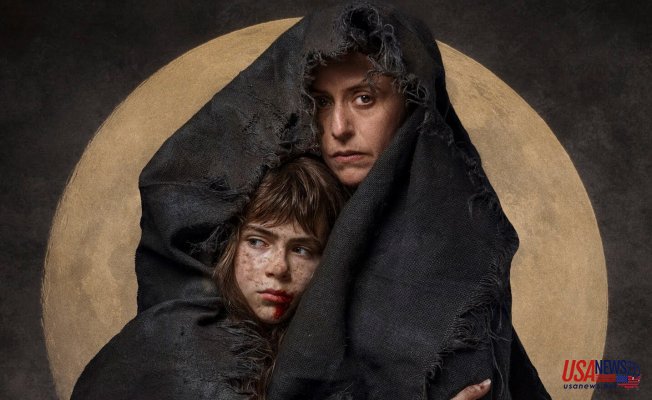 The FANT Fantastic Film Festival, organized by the Bilbao City Council, has started with 'Ilargi Guztiak. All the Moons', which has shown the feature film at the Campos Elíseos Theater at its opening gala, before its national premiere on May 14. The film deals with the fantastic through historical drama and echoes of a modern fairy tale.

The vampiric theme of the film fits well with the theme of the festival, which pays homage to Dracula, in a complementary exhibition, although the intention is rather far from the intentions of Bram Stoker, being an intimate look at the life of a girl who she is turned into a vampire with little interest in horror and more focused on the day-to-day tragedy of someone with the disease, with one eye on the fable and another on the historical reenactment.

Fantastic blur
'All the moons' takes place, like the recent 'Errementari', during the death throes of the last Carlist war, and in this context a girl is rescued from an orphanage that has just been attacked by a mysterious woman (Itziar Ituño) who lives in deep in the forest. Wounded, the little girl will think she sees an angel in her who has come to look for her to take her to Heaven, but what she really does is give her eternal life in exchange for her company.

The development of her story is not different from what Claudia could have in 'Interview with the vampire' (1994) but from her point of view, experiencing the painful passage of time locked in the body of a girl, in which we see the effects of vampirism in a relatively realistic way, despite the tone of legend, and we continue "counting moons" until we meet Cándido, a humble man who will welcome him into his home as his own daughter, which will lead to a life plot rural without too many knot points.

Basically, in its central act is where the relationships of 'Let me in' are emulated, but the most sordid implications of that side are much softened, navigating between the experiences throughout the time of Anne Rice's stories with the most neutral tone of 'Byzantium', also by Neil Jordan, of which he has a moment traced without much modesty. A pity that she does not decide to go for the mysterious and cloudy tone that she points to at some point, in which she could remember 'Lemora, a supernatural tale', but that seems rather by coincidence.

Igor Legarreta is not new to the fantastic, and you can see the author's touch of the script for the television movie 'Return to Moira' (2006), within the series 'Movies to not sleep', and here he recovers another Basque myth, that of the 'gauekos', beings of the night that made the villagers fear to go out at night, but decides to eliminate that romanticism of fears and superstition, and the enormous possibilities of the forests, to look from the inside at these beings as people, that feed on wars and death while history passes through them.

'All the moons' is presented as "a fantastic fable that reflects on the fear of death and immortality" but it is another one of those fantastic films that to justify its investment (the production is great) needs a didactic alibi, with its base of legend that would approve some council of culture and a historical fabric that allows the umpteenth crude caricature of the clergy and the romantic drawing of history, with the classic implicit territorial ideological poetics, which vampires are regularly concerned with.

The result is another flawless film on a technical level that is pleasing to the eye but whose script is much more pedestrian than its solemnity intends, without being able to convey many emotions, in tune with other looks similar to folklore and history such as the aforementioned 'Errementari ',' Handía 'or the recent' Akelarre ', which share an ashen and ocher hue that alternates boredom or indifference and entrusts their letters to Manichean undertones that begin to repeat themselves in a worrying way in these looks at the genre that update mythology with the same regionalist themes, with more attention to the image than to the conflicts that move its history.