Who gave Warren Beatty which envelope — and why?And did Putin have anything to do with it?Inevitably, Topic A at the must-do post-Oscar bash — Vanity Fair’s annual civilized smorgasbord — leaned towards what’s now being... 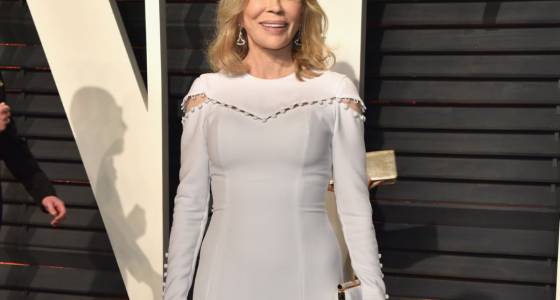 Who gave Warren Beatty which envelope — and why?

And did Putin have anything to do with it?

Was any of it real, come to think of it? Was I being “La La-ed” (the new Merriam Webster definition for a short-lived, too-good-to-be-true reverie) when I wound up standing next to Caitlyn Jenner daintily eat one French fry at a time at the party? Was that Mick Jagger really boogie’ing in the haute discotheque-styed back round room at the soiree, as Kelsey Grammar sung to himself under his breath, and Jennifer Aniston manifested.

“It was a mistake,” Warren’s accomplice, Faye Dunaway, told me forcefully when I encountered her. Minutes earlier, I’d eye-spied Mommie Dearest zipping out her phone to let late-night host James Corden see a pic of the card that they’d gotten stuck with it on-stage — one with Emily Stone’s name for Best Actress on it.

But was that photo itself a fake? I found myself getting more Kellyanne Conway-esque as the night wore on, not that Ms. Conway was anywhere to be found in this annual blow-up of guests pulled from the worlds of arts, tech, fashion, sports, and business, legends, arrivistes, and meal-tickets galore. A Jeff Bezos there. A Maria Sharapova here.

“At least everyone got to make a speech,” the great Catherine O’Hara was heard saying with a glass-half-full approach to the Oscar tele-mess.

The Graydon Carter-hosted bash — held once again in a built-to-suit aerie designed by Basil Water in the inside-outside space encompassing the Wallis Annenberg Centre for the Performing Arts — was an ever-shifting collage, a population reconstituting itself every few steps into fabulous, often improbable, constellations of, say, Fran Lebowitz, John Hamm, and Janelle Monáe.

Time-stamp, 10:55 pm, PT: Monica Lewinsky (yes, Monica Lewinsky), is idling with Sarah Paulson, near the long bar. It seems like Paulson — who already played another 90s-era character to the hilt when she nailed the part of Marcia Clark in American Crime Story, and is now being courted by series create Ryan Murphy to play Lewinsky’s blabbermouth friend, Linda Tripp, in another upcoming anthology on the infamous Monica — was getting some research and counsel done at the party. Hot — or what? (By the way, Lewinsky is very winsome in person! And seems rather fun!)

Boldface eating other boldface — that’s the name of the game at this annual rite. They’re commiserating, appraising, butts-kissing, and let’s-do-lunch’ing. Reese Witherspoon makes a pilgrimage to Charlize Theron, Kerry Washington is showing a pic of her new baby boy to Mindy Kaling, Kate Hudson is sneaking up behind Martin Short to shake him from behind, Elton John is an orbit beside Salman Rushdie, and many other celebs, yet, have taken to nesting in Halle Berry’s ‘fro. (OK, made that last part up! Wanted to make sure you were paying attention!) Did I mention that Orlando Bloom and Katy Perry continue to go strong?

Time-stamp, 12:04 a.m, PT: I see a phone left charging in a wall, which immediately raises all kinds of theories on my end, in a Stars-They’re-just-Like-Us kind of way. Does the juicing mystery-phone belong to “Anastasia Steele”, aka Dakota Johnson, who’s kicking about? Might it have been the property of Elon Musk? Mariah Carey? Mariah J. Blige? (I’ll never know. . . as the phone disappeared when I made another round)

Who’s up? Who’s down? Who’s holding steady? The party, as usual, was a Research test unto itself when it comes to those matters. We see yesterday’s arrivistes who are now the vanguard and others who are already all-too acquainted with the cruel diminishing returns of fame.

Take: Dev Patel, who went into this particular Awards Season with quite a bit of goodwill already banked towards him, but came out of it a movie star, not only because of his assured performance in Lion, but the manliness now prescribed to him. It’s the hunky wild hair, some say!

“I’m not cutting it,” Dev told me, when we chatted briefly. At least not yet.

Time-stamp, 1:31 a.m., PT: Casey Affleck, statuette-in-hand, has the day-after-the-prom look about him. Just hours after nabbing the Best Actor prize, he is telling someone, “I’m just glad that it’s over.” After an award season that really does go on (and on), he points out the life of Manchester by the Sea started when it premiered at Sundance two whole Sundances ago. It’s a long time to be talking about one film, and one performance, let alone campaigning for an Oscar!

One can feel the air going out of the party, in general, as the clock bogs down, and the In-N-Out burgers (an annual tradition) start to deplete.

The event, by the way, started off as a smaller dinner, helmed by Thomas Keller of the French Laundry restaurant. For the third year in a row, Mark Seliger took portraits of guests that rolled exclusively on Instagram. And, finally, each table setting came with an engraved zippo lighter — another Graydon tradition! — this year attached with with a quotation by Carrie Fisher.

“As you get older, the pickings get slimmer, but the people don’t,” was the Fisher line. One only wonders what the irony-laden screwball would had to quip about Sunday’s Moonlight/La La Land imbroglio.

Alas, we will never know.