From the late 1990s to the early 2000s, the Ruff Ryders Entertainment record label’s popularity and success in hip-hop was only rivaled by Bad Boy Records, Roc-A-Fella Records and No Limit Records.With a stable of artists that included DMX, Eve, Swizz Beatz... 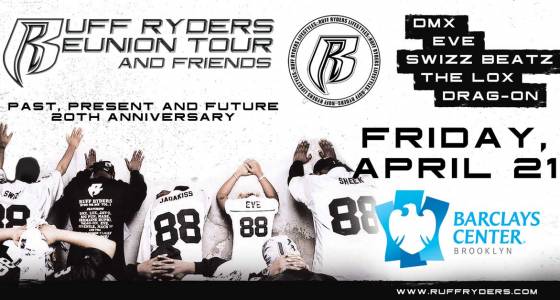 From the late 1990s to the early 2000s, the Ruff Ryders Entertainment record label’s popularity and success in hip-hop was only rivaled by Bad Boy Records, Roc-A-Fella Records and No Limit Records.

With a stable of artists that included DMX, Eve, Swizz Beatz and The LOX,  the crew created a sound that became synonymous with east coast hip-hop. As time went on, the label’s popularity decreased, but the artists have remained active. Having all embarked on their own successful careers, the Ruff Ryders crew is officially reuniting for a one-night only concert in Brooklyn, New York.

Announced on Tuesday, DMX, Eve, Swizz Beatz, The Lox and Drag-On will all reunite on April 21 at the Barclays Center in Brooklyn for the Ruff Ryders Reunion Tour and Friends to celebrate 20 years. As the name of the show suggests, you can expect to see other artists appear as well.

Find out how you can get tickets to the Ruff Ryders reunion show in April. Photo: Ticketmaster

Pre-sale tickets for the show go on sale 10 a.m. EST while general public tickets will be available on March 3 at 12:00 p.m. EST. Pre-sale tickets include the Ruff Ryders pre-sale, Live Nation and Live Nation mobile app pre-sale, American Express pre-sale and Internet pre-sale. Prices will range between $39.50 and $249.50.

DMX took to social media on Tuesday to celebrate the announcement, writing, “Brooklyn! Barclays April 21 will be a night to remember! #letsgetiton.” And while the show is only listed to last one night, if it’s anything like the Bad Boy Entertainment reunion concert of 2016, a tour could follow.

In a 2016 interview with Fader, DMX discussed the making of his classic 1998 album, “Flesh of My Flesh, Blood of My Blood,” which released seven months after his multi-platinum selling debut album, “It’s Dark and Hell Is Hot.”

“Lyor [Cohen, co-president of Island Def Jam Music Group from 1998-2004] said if I could do another album in 30 days, I’d get a million-dollar bonus. That was the whole drive,” he told Fader. “I wanted to get that bonus… I wanted to get it out. The first album had 19 songs, so I already felt like I was cheating a little bit by giving them less songs than on the first one.”