How did we get to the envelope gaffe? The great Oscar drama of 2017

The envelope debacle that stole the spotlight from “Moonlight”  at the end of the 89th Academy Awards ceremony sparked enough fury and fervor to cement the incident among the great Hollywood dramas of all time.How did this happen? Who dropped... 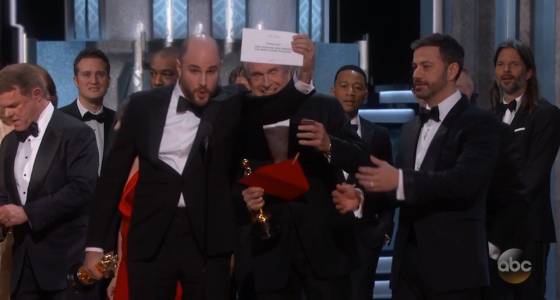 The envelope debacle that stole the spotlight from “Moonlight”  at the end of the 89th Academy Awards ceremony sparked enough fury and fervor to cement the incident among the great Hollywood dramas of all time.

How did this happen? Who dropped the ball? What did the “La La Land” producers know and when did they know it? Was there a second set of envelopes from the grassy knoll? (Kind of.) Is this Hollywood’s Zapruder film and, if so, who is Babushka Lady?

We watched and rewatched, fast-forwarded, rewound and froze frames. We observed the players and talked to some people backstage before, during and after the slow-motion wreck. We look forward to the documentary, which will surely win an Emmy. (Or will it?)

Things seemed to be going just fine for Sunday’s Oscars heading into the big finish. So well, in fact, that PricewaterhouseCoopers managing partner Brian Cullinan tweeted a photo of Emma Stone with her newly received award for lead actress at 9:05 p.m. Pacific.

The tweet doesn’t necessarily mean that Cullinan was derelict in his duties, but it’s also since been deleted from his Twitter feed.

Cullinan’s tweet wouldn’t even be noteworthy but for the fact that he was one of two people in the entire world responsible for the envelopes containing the Oscar winners at that moment. And things were about to go very wrong.

Before continuing, it’s important to be aware of the PricewaterhouseCoopers Oscar envelope protocol.

There are actually two sets of winners envelopes, handled at the ceremony by two representatives of PwC, in this case Cullinan and Martha Ruiz.

The company’s representatives are stationed on opposite sides of the stage, distributing envelopes to presenters depending on where they are entering from.

The most likely theory for what went wrong is that Leonardo DiCaprio, who awarded Stone her Oscar, got his envelope from one PwC rep and Warren Beatty was mistakenly given the duplicate best actress envelope on the opposite side of the stage when he went out to present best picture.

A PwC spokesperson confirmed to the Huffington Post on Monday afternoon that it was indeed Cullinan who handed Beatty the wrong envelope.

In a cruel bit of irony, Cullinan had spoken to HuffPo just days before explaining to them that the announcement of a mistaken winner at the Oscars was “so unlikely.”

PwC told The Times that they would be releasing an official statement on the matter Monday evening.

Upon seeing the results, Beatty clearly wasn’t sure how to proceed. He stalled. He looked past Dunaway offstage for help. He then showed his co-presenter the envelope — who, it should be noted, had asked to be able to read the winner — who seemed to think that Beatty was just hamming it up for the audience. It now seems more likely he was asking her to confirm that she was seeing what he was seeing but, unamused, Dunaway read the film title on the card, which was “La La Land,” as it was actually announcing Stone’s win. And things devolved from there.

Jaws dropped inside the Dolby Theatre. Backstage, pandemonium broke out.

Times reporter Jeffrey Fleishman witnessed a stagehand in the wings repeating, “Oh my god, he got the wrong envelope,” pacing the floor as the cast and crew of “La La Land” took the stage to unwittingly accept their erroneous award, suggesting that one of the PwC representatives immediately alerted others of the mistake.

But when precisely did “La La Land” producers Jordan Horowitz, Marc Platt and Fred Berger realize that their dreams were about to morph into some twisted nightmare?

“There’s a lot of love in this room, and let’s use it to create and champion bold and diverse work — work that inspires us towards joy, towards hope and towards empathy,” Horowitz said.

Platt took the mic next for his remarks and as he spoke, behind-the-scenes staff appeared to join the cast and crew onstage to explain what had gone wrong. Among them was Cullinan.

The official transcript from the academy states that as Platt is speaking, both Horowitz and Berger are shown the correct envelope and it is revealed to them that “Moonlight” has actually won the night’s top prize.

Platt, still oblivious, concluded his remarks, saying: “Repression is the enemy of civilization — so keep dreaming, because the dreams we dream today will provide the love, the compassion and the humanity that will narrate the stories of our lives tomorrow,” before ceding the spotlight to Berger.

Berger hesitated, shook his head “No,” then proceeded to the microphone anyway.

The third “La La Land” producer thanked family and friends then, looked behind him to see that the jig was up.

“We lost, by the way. But, you know. There’s a mistake,” Berger said with all the enthusiasm of someone who had just experienced a particularly arduous colonoscopy.

At this point Horowitz stepped in to try and stage-manage the historic gaffe, stating, “This is not a joke” and, swiping the correct card from Beatty to display, before (accurately) announcing “Moonlight” as best picture.

Beatty tried to explain his part in the confusion and eventually the cast and crew of “Moonlight” took the stage.

“Very clearly, very clearly, even in my dreams, this could not be true. But to hell with dreams, I’m done with it, ’cause this is true. Oh my goodness,” said “Moonlight” director Barry Jenkins upon finally taking the stage to receive the hotly contested award.

After the cameras turned off, those involved were still stymied by what took place.

Stone told reporters, “I was on such a buzzy plane backstage that I already felt like I was on another planet.

“It was an incredible outcome, but a very strange happening for Oscar history.”

She also shared this tidbit, which added credence to the second envelope theory: “I also was holding my best actress in a leading role card, so I’m not sure what that was. Whatever story you’re hearing.”

As for Beatty, he told The Times after the show, “I looked down at the card and thought, 'This is very strange, because it says best actress.' Maybe there was a misprint. I don't know what happened.”

Host Jimmy Kimmel had only kind things to say about the producers of “La La Land” after everything had been hashed out.

PricewaterhouseCoopers released a formal apology in the wee hours of Monday morning, stating that it was investigating how the mistake could have happened and giving regrets to all involved.

But what about the actual people involved? What was it for the creators of “Moonlight” to be robbed of their singular moment? And for those responsible for “La La Land” to have their dreams dashed in such painful fashion?

Those questions were answered when Horowitz crossed paths with Jenkins and “Moonlight” producer Jeremy Kleiner at the Governors Ball.

“I wish you had your moment,” Horowitz told Kleiner, who hardly had time to utter anything during his film’s brief time on stage accepting the Oscar.

Kleiner told The Times that he loved “La La Land” and he loved his film but that the experience was different because of the flub.

Asked if it felt the same as winning in the traditional fashion, Kleiner shrugged and said, “It can’t. How can it?”

In contrast, Horowitz gave an acceptance speech for an award he didn’t receive and seemed shaken by the experience.

“I'd like to watch it and see what happened. I still don't know if I can watch it,” he said.

Horowitz may not be able to watch the video yet but the Internet more than has him covered in the meantime.

See the most-read stories in Entertainment this hour »

A time-lapse video of the Oscars red carpet.

A time-lapse video of the Oscars red carpet.

WATCH: Barry Jenkins, writer and director of "Moonlight," on the red carpet at the 2017 Academy Awards. "Everyone looks to the filmmaking community to reflect the world we live in," he said. And after the Oscars? "I'm going to Mexico," he said. "I'm going to the Yucatan."

WATCH: Barry Jenkins, writer and director of "Moonlight," on the red carpet at the 2017 Academy Awards. "Everyone looks to the filmmaking community to reflect the world we live in," he said. And after the Oscars? "I'm going to Mexico," he said. "I'm going to the Yucatan."

Meryl Streep's eyes say it all: Look at the Oscar crowd's faces during the 'Moonlight' mix-up

'Oh my god, he got the wrong envelope' -- backstage during the Oscars' best picture chaos

4:10 p.m.: This article was updated with confirmation that Brian Cullinan was the individual responsible for the best picture mistake.

This article was originally published at 3:05 p.m.