Famagusta 7°
clear sky
BUSINESS EDUCATION ENTERTAINMENT HEALTH POLITICS SCIENCE SPORTS TECHNOLOGY
10:22 Four Benefits of Hiring a Dedicated Development Team
04:48 Mark Kelly, President of Safety Marking Inc., Discusses Structuring Effective...
17:58 Trump wants to play golf at the Biden swearing-in in Scotland - but is...
17:54 First doubts Regarding tightened Steps: two National Countries Extract...
10:39 Covid-19 : in France, the end of containment and entry into force of the...
04:34 The schools of Rome will use the Internet with light bulbs: what it is...
10:58 Kratom Tea: How Is It?
11:46 Office Furniture Products for you!
12:17 Top Clubs, Their Value, Revenue And Current Standings
11:14 Reasons Why Rewarding Yourself is a Good Practice
BIST
1542
GOLD
442.583
USD
7.3985
GPB
10.1685
EUR
9.0105
Breaking News
Online Etiquette Rules for Managing a Virtual Business
Close

It’s been a rough winter for Highway 1, but finally there’s a little good news. The coastal route that has been dogged by mudslides, downed trees and damage from heavy rains reopened Tuesday afternoon between Big Sur and Carmel, Caltrans reports.That... 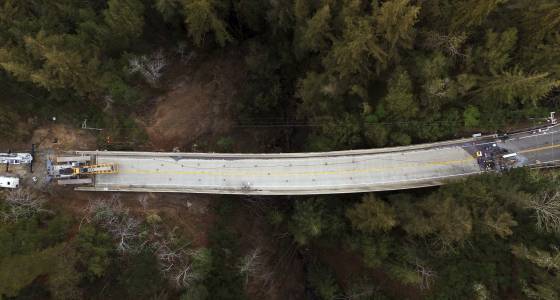 It’s been a rough winter for Highway 1, but finally there’s a little good news. The coastal route that has been dogged by mudslides, downed trees and damage from heavy rains reopened Tuesday afternoon between Big Sur and Carmel, Caltrans reports.

That means visitors coming from the north will once again be able to access part of Big Sur, which had been cut off to travelers by a failed bridge and road closures since mid-February.

The northern part of Highway 1 had been closed to traffic in both directions at Palo Colorado Road near Ragged Point, about 10 miles from Carmel.

Now it’s open roughly as far as the Pfeiffer Canyon Bridge, which was supposed to be demolished Monday. Problems with positioning the crane and a wrecking ball to smash the buckling span have forced a delay.

Once the demolition is complete, work will begin on building a replacement, which could take up to a year.

Traffic closures in both directions remain in the southern part of Highway 1. Drivers heading north from Cambria and San Simeon will get no farther than Ragged Point. Parts of the road near the towns of Lucia and Gorda remain closed too.

Stay up to date on Highway 1 closures online at Caltrans Quick Map.