From The Catwalk To The Big Screen - Casino's In Vogue

Many of us associate playing casino as part of a suave and sophisticated lifestyle, where the roll of the dice or turn of the cards can sometimes mean huge fortune 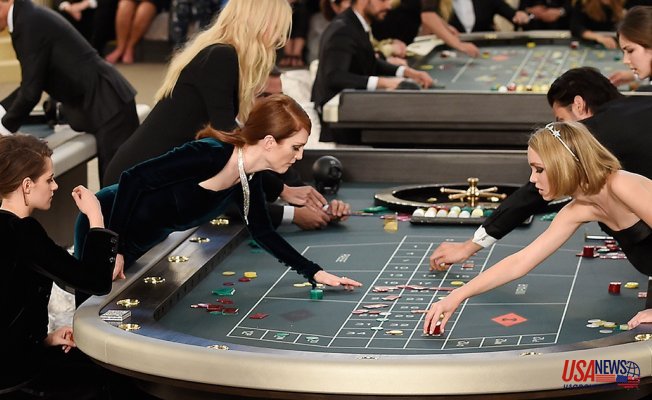 Many of us associate playing casino as part of a suave and sophisticated lifestyle, where the roll of the dice or turn of the cards can sometimes mean huge fortune. The glamorous imagery of casino has meant that it has always been a prominent part of pop culture and, by the looks of things, that’s something that’s set to continue.

Casino is in Style

In June this year, a Moschino collection at the MADE Fashion Festival in LA was based entirely around the world of the Vegas showgirl. Designer Jeremy Scott took the lifestyle of the showgirl as his inspiration, with sequins, lace, and feathers all featuring heavily in the outfits on the Moschino catwalk.

This isn’t the only example of casino taking over a fashion show in recent years. In 2015, Chanel hosted a casino-inspired collection and, instead of the standard catwalk, Karl Lagerfeld created a casino set as a backdrop for his designs. Celebrities such as Julianne Moore, Kristen Stewart, and Lily Rose Depp - all dressed in Chanel, of course - opened the show by taking their places at Chanel-branded gaming tables. The models, meanwhile, all sported matching black bobbed wigs and were dressed by Lagerfeld in shiny dresses or suits and in glittering, textured coats; all of which would be perfectly suited to a night out at the casino.

Now that millions of us play casino games on a daily basis online or on our smartphones, the casino theme seems to be as current and relevant as ever on the catwalk. After all, it's possible to play everything from video slots through to table games such as roulette, poker, and blackjack wherever an internet connection exists. Along with fashion, casinos are also at the forefront of technological innovation; click here now to find out more about how to play live casino games with the cryptocurrency Bitcoin, while interacting with real dealers via live-streaming.

Of course, away from fashion, another area where casino inspiration has often been used is in blockbuster movies, and there have been many films that either feature a casino scene somewhere in the action or where the plot is based entirely around the world of casino. The Ocean’s Eleven trilogy of films may have been heist movies but they were still just about emphasising the glamor of the high-rolling casino lifestyle.

This summer, there’s a new casino movie out; this time with a comedy focus. In The House, Will Ferrell and Amy Poehler team up as husband and wife Scott and Kate Johansen. Parents to a daughter about to start college, whose scholarship has fallen through, they need to make lots of money very quickly.

The obvious solution to their dilemma is to set up a casino in their basement, enlisting their friends and neighbours to get involved too. While the good times roll, chaos also descends on the neighbourhood. While it might not quite have the same slick nature as the Ocean’s Trilogy, the fact that we’re still seeing new casino-based movies being released goes to show how casino remains a big part of popular culture.