At just 31 years old, rising country music star Chase Rice has already led a rather interesting life.Long before he was known for singles such as “Ready Set Roll,” “Gonna Wanna Tonight” and his latest, “Everybody We Know Does,”... 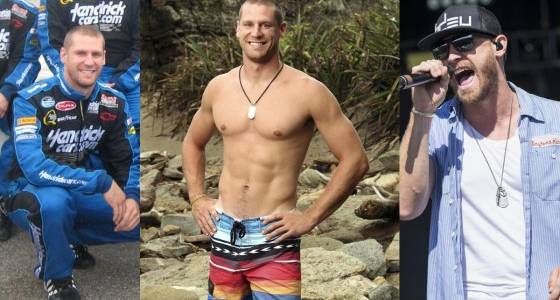 Long before he was known for singles such as “Ready Set Roll,” “Gonna Wanna Tonight” and his latest, “Everybody We Know Does,” Rice was a promising linebacker for the University of North Carolina Tar Heels, but an injury sidelined any dreams of an NFL career.

After graduating, through a contact he made in college, Rice was picked up to be part of the Hendrick Motorsports pit crew for NASCAR driver Ryan Newman and went on to serve on Jimmie Johnson’s crew, which won a couple of Sprint Cup championships during his time there.

As if all that excitement wasn’t enough, Rice then became a contestant on CBS’ “Survivor: Nicaragua” in 2010 and ended up one vote shy of winning the million dollar prize, which he lost to Jud “Fabio” Birza.

“I have had a pretty wild life,” Rice said with a laugh during a recent phone interview. He’ll be in town soon to headline two sold-out shows at the new House of Blues at the Anaheim GardenWalk March 3-4 and the House of Blues San Diego March 5-6.

“All of those things that I was doing, I was never really happy,” he continued. “I always wanted to move to Nashville and do music and really give it a shot, even if it was just songwriting, because it was literally the thing that made me genuinely happy. Before we even had any success with it, I loved what we were doing. I’ve really never had to work a day in my life because I’ve had such cool jobs, but playing music is by far the coolest one I’ve had.”

Rice is also no stranger to shows in Southern California. Last summer he headlined the inaugural Coastal Country Jam in Huntington Beach and he has had several sold-out shows at the now closed House of Blues Sunset in West Hollywood and the previous House of Blues Anaheim location in Downtown Disney.

“One of the first tours I ever did was playing House of Blues venues across the country three years ago,” he said. "I didn’t think anyone knew who we were, but the California country fans showed up and they were rowdy. It surprised me, but it was a lot of fun. I actually have no clue what this new House of Blues venue will look like and I’m not even going to really take a good look on purpose until the first show and I walk out on the stage that first night. That makes it exciting.”

Before headlining his own gigs, Rice was going out on tour with guys like Kenny Chesney and Dierks Bentley, two mega-talents he said he took away a lot from on the road.

“Those are probably the two that took me under their wings the most,” he said. “With Kenny, it was just every single night, he played it like it was the last show he’s ever done. That’s how we’ve built things too, that there are no days off if we have a show and we’re giving it everything we’ve got that night for that show. Kenny takes that to another level. There were nights when he was feeling horrible but he’d go out there and flip that switch and all of a sudden he’s Kenny Chesney up there. It was fun to learn from guys like that, not to mention they’re just good guys. You get to see how they are as people and you realize you can still live a pretty normal life even with all of the fame and whatever. There was a lot to learn from them and we took it all in.”

Rice has been working hard on a follow up to his 2014 album “Ignite the Night,” which debuted at No. 1 on the Billboard Top Country Albums chart. Though his label gave up on the first new single, “Whisper,” which was put out last year, Rice seems to have found his footing again with the next single, “Everybody We Know Does.”

“With ‘Whisper,’ it got pulled before we had a chance to really work it, which was a disappointment,” he said. “I love the song and thought it would have worked but it didn’t really get the chance. ‘Everybody We Know Does,’ though it’s only gotten to like No. 40, people have been singing along to it at the shows like it’s a No. 1 single. The fact that the fans are signing it like that means more to me than anything.”

Rice said he promises that he’ll be getting something out, whether an EP or full album, in 2017 and “trust me,” he added. “It’s going to be worth the wait.”

As for participating in any future reality TV shows, Rice quickly replied “Hell no, I’m done with reality TV,” he said with a chuckle. “I love what I’m doing now way too much to go back to that. It was definitely a once in lifetime experience but I’m going to leave it at once in a lifetime.”