ROME -- Pope Francis has become the first pontiff to visit an Anglican church in Rome.Francis and an Anglican bishop prayed side-by-side Sunday afternoon at All Saints Church in central Rome.Bishop Robert Innes welcomed Francis by praising the Roman Catholic... 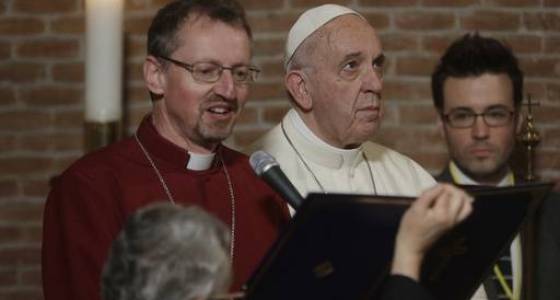 ROME -- Pope Francis has become the first pontiff to visit an Anglican church in Rome.

Francis and an Anglican bishop prayed side-by-side Sunday afternoon at All Saints Church in central Rome.

Bishop Robert Innes welcomed Francis by praising the Roman Catholic leader for his solidarity with refugees and migrants.

Anglicans split from Catholicism in 1534, when England's King Henry VIII was denied a marriage annulment. Both churches are striving toward greater closeness despite obstacles.

Francis in his homily acknowledged that Anglicans and Catholics "viewed each other with suspicion and hostility" in past centuries.

He encouraged both faiths to be "always more liberated from our respective prejudices from the past."

Francis made no references to major theological differences, including the Anglican practices of ordaining women and allowing openly gay bishops.