Foster, Fox call for unity at rally for immigration rights

CaptionCloseBEVERLY HILLS, Calif. (AP) — As most of Hollywood gears up for the Oscars on Sunday and the whirlwind of events and parties this weekend, celebrities and top talent agents gathered in Beverly Hills Friday to do something to do something... 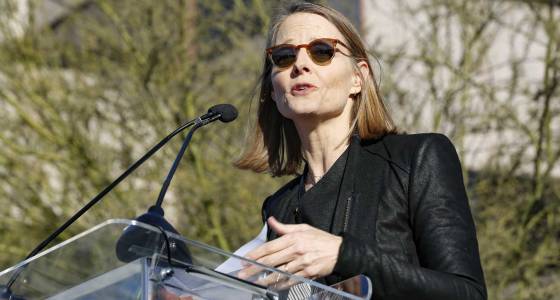 BEVERLY HILLS, Calif. (AP) — As most of Hollywood gears up for the Oscars on Sunday and the whirlwind of events and parties this weekend, celebrities and top talent agents gathered in Beverly Hills Friday to do something to do something a little different: rally for immigration rights.

Jodie Foster, Michael J. Fox and Keegan-Michael Key were among the speakers at the rally, organized by the United Talent Agency outside of their Beverly Hills headquarters. The talent agency, better known as UTA, planned the nearly two-hour United Voices rally in lieu of holding their annual Oscars party. Security officials estimated there were 1,200 people in attendance.

Key, who kicked things off, said the event was intended to, "support the creative community's growing concern with anti-immigration sentiment in the United States of America and its potential chilling effect on the global exchange of ideas, not to mention freedom of expression."

He welcomed all, including a handful of Trump supporters, because he said "this is America, where you get to believe what you want."

One Trump supporter walked through the crowd in a Make America Great Again hat early on saying "you're not going to block me."

For the most part, however, the crowd was subdued, civil and attentive to the celebrity speakers.

Michael J. Fox, who became a United States citizen some 20 years ago, remembered being annoyed at the 8-year process to citizenship and now wonders what he was complaining about.

Turning immigrants away, Fox said, is "an assault on human dignity."

One of the best-received was Jodie Foster who enthusiastically yelled "this is a great idea! Why didn't I think of this?"

Foster said she's never been comfortable using her public face for activism and has always found the small ways to serve, but that this year is different.

"It's time to show up," she said. "It's a singular time in history. It's time to engage. And as the very, very dead Frederick Douglass once said 'any time is a good time for illumination.'"

The Oscar-nominated Iranian filmmaker Asghar Farhadi also spoke via video from Tehran to praise the show of unity among the cinema community. Farhadi previously said he would boycott Sunday's ceremony as a result of President Donald Trump's Muslim travel ban.

"It is comforting to know that at a time when some politicians are trying to promote hate by creating divisions between cultures, religions and nationalities, the cinema community has joined the people in a common show of unity to announce its opposition," Farhadi said. "I hope this unity will continue and spread to fight other injustices."

California Lt. Gov. Gavin Newsom, UTA CEO Jeremy Zimmer and Reza Aslan were among the others who took the podium during the event, which also included a DJ set and live performances from the X Ambassadors and Ben Harper.

UTA previously announced that it was donating $250,000 to the ACLU and the International Rescue Committee and has set up a crowd funding page to solicit more donations. At press time, over $320,000 had been raised.