The Florida Strawberry Festival, founded in 1930, keeps its old-fashioned charm with an 80-ride midway, contests, agriculture exhibits and of course, strawberries in every form. There's no alcohol and festival organizers pride themselves on family-friendly,... 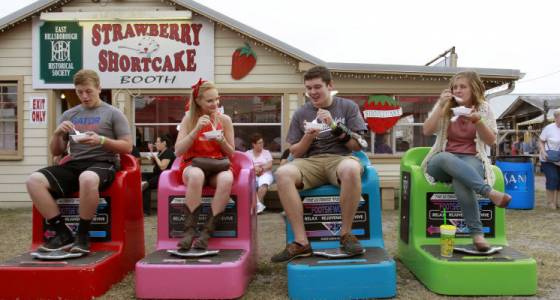 The Florida Strawberry Festival, founded in 1930, keeps its old-fashioned charm with an 80-ride midway, contests, agriculture exhibits and of course, strawberries in every form. There's no alcohol and festival organizers pride themselves on family-friendly, even corny, diversions and contests. The formula must work because the Plant City festival remains the second-largest in the state, just behind the Miami-Dade County Fair, and drew a record 560,387 visitors in 2016. Here are some basics if you head to this year's Florida Strawberry Festival:

Directions: The festival grounds are at 303 N Lemon St., Plant City. Every year, Interstate 4 comes to a crawl in Plant City, especially on the weekends or before a big concert. Avoid I-4 by taking State Road 60 through Brandon and using local roads. Find detailed directions for back roads here: tbtim.es/egv

Parking: There are three designated lots on the festival grounds, and numerous private lots and yards surrounding the festival for $5 to $15 depending on vehicle size.

For information: Follow the festival on Facebook, Twitter and Instagram and the hashtag #berryfest17. The festival also has a free app that has the day's schedule, a map and a tool to help you find where you parked your car. flstrawberryfestival.com. (813) 752-9194.

Smoothie record attempt: On Friday, Cabot Creamery will attempt to set a world record with a 1,000-gallon smoothie. Their tent near Gate 1 will use 250 gallons of vanilla yogurt mixed with ice, whey protein powder and 2,000 pounds of strawberries. For added showmanship, from 10 a.m. to 4 p.m., special guests will pedal bicycles in 15 minute intervals to power the Vitamix blenders whirring the 1,000-gallon holding tank. A $1 donation to the United Food Bank gets you a commemorative cup and a smoothie after the record is reached.

Contests: There are six different food contests over the 11-day festival including a corn dog eating contest March 8, a strawberry spaghetti eating contest (that's spaghetti in a strawberry sauce) on Monday, March 6, and strawberry shortcake eating on March 9. The kids compete on Sunday to be the first stemmer to pick all the green parts off a pack of berries. Adults will be speed-stemming on Tuesday.

Parades: The Youth Parade begins at 11 a.m. Saturday, March 4 and runs down Reynolds Street on the south end of the fairgrounds. Grand Parade Day is Monday, when the parade passes the festival grounds around 2 p.m.

All about that berry: Plan to pick up a flat of berries because the Plant City farmers pride themselves on sending the very best strawberries to the festival. For more berry goodness, the festival is famous for its strawberry milk shakes, strawberry pie, a strawberry dessert pizza and the famous strawberry shortcake. The shortcake lines may be long, but they move swiftly. There's also odd takes on the berry, like Carousel's hamburger topped with crumbles of strawberry cookies, sandwiched between two pieces of French toast and topped with strawberries. And you can find strawberry lemonade, strawberry-flavored kettle corn and peanut brittle with a sweet strawberry twist.