CaptionClosePresident Donald Trump railed against the news media Friday, saying reporters shouldn't be allowed to use anonymous sources. He said he's been a target of unrelenting criticism by unnamed people, and he predicted that negative stories would... 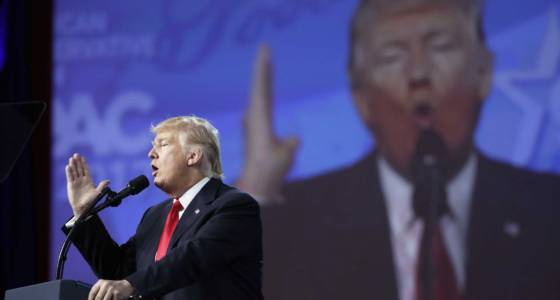 President Donald Trump railed against the news media Friday, saying reporters shouldn't be allowed to use anonymous sources. He said he's been a target of unrelenting criticism by unnamed people, and he predicted that negative stories would "dry up like you've never seen before" if anonymous sources were jettisoned.

Of course, any effort to limit sources would conflict with the First Amendment. Separately, 39 states and the District of Columbia have reporter shields, which offer various protections from subpoenas and the forced disclosure of sources, according to the Reporters Committee for Freedom of the Press. But there is no shield in federal law, despite past efforts in Congress to pass one.

"The Supreme Court has held back on recognizing a constitutional reporters' shield," said Gabe Rottman, a lawyer at the Center for Democracy & Technology in Washington.

At the federal level, "there's been a grand struggle between the courts and reporters," Rottman said. "Reporters have to face the unfortunate fact that they may be held in contempt if they don't disclose their sources. That's also seen as a badge of pride by many reporters."

— New York Times reporter Judith Miller was held in contempt and spent 85 days in jail in 2005 rather than divulge a source in the government's investigation of leaks about an undercover CIA agent. She ultimately testified before a grand jury after saying her source, I. Lewis "Scooter" Libby, had waived confidentiality. Two courts, citing national security, ruled against Miller in her contempt case, and the Supreme Court declined to hear her appeal.

— In 2014, defense lawyers in the Colorado theater mass shooting failed to persuade courts to force Fox News reporter Jana Winter to reveal her sources. The lawyers wanted to know how she had learned that James Holmes sent his psychiatrist a notebook containing violent images before the 2012 attack. Winter was protected under a New York shield law.

— Former prosecutor Richard Convertino spent years trying to learn the source of a 2004 Detroit Free Press story about a secret ethics investigation against him when he worked at the U.S. Justice Department. David Ashenfelter refused to reveal how he got details, invoking a constitutional right against self-incrimination. An appeals court closed the matter in 2015 with a decision in his favor. "I'm relieved that this legal nightmare may finally be over," Ashenfelter said at the time.

Rottman said Trump's comments about anonymous sources could have a chilling effect on people who want to tell reporters about waste, fraud or something worse in government.

"The use of anonymous sources has been essential in drawing back the veil of secrecy from an overstepping government," Rottman said.