CaptionCloseAt a time when unrest, fear and protest are once again prevalent in this country, Dustin Lance Black, one of San Antonio’s few claims to Oscar fame, urges everyone, especially younger viewers, to watch “When We Rise.”The sprawling... 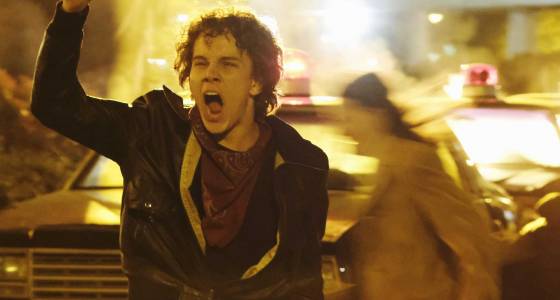 At a time when unrest, fear and protest are once again prevalent in this country, Dustin Lance Black, one of San Antonio’s few claims to Oscar fame, urges everyone, especially younger viewers, to watch “When We Rise.”

The sprawling TV epic, created by Black and executive produced by him and Gus Van Sant, focuses on a tenacious group of diverse men and women who, over four trying decades, joined hands and fought for many of the precious rights enjoyed today.

Airing across four nights, “Rise” chronicles the personal and political struggles, setbacks and triumphs of three LGBT pioneers who helped spearhead one of the last battles of the U.S. Civil Rights movement from its turbulent infancy in the 1970s to that exuberant day in 2015 when the Supreme Court legalized same-sex marriage nationwide.

“I would give anything in the world for it to be less topical right now,” Black, who won an Oscar for writing “Milk,” said of his newest labor of love at a January press session.

Black, who spent his elementary and middle school years in San Antonio, said he is grateful to ABC for airing the miniseries.

“I’m grateful (to) all of the artists who helped make this, because I do think it’s a necessary conversation to have right now — a conversation about what it’s like to be a minority in this world and how important it is for us to work together so that we can live lives that are more equal and that are safer,” he said.

“When We Rise” kicks off with a two-hour episode at 8 p.m. Monday on ABC and continues at the same time Wednesday through Friday. The interruption Tuesday is to accommodate President Trump’s televised address to a joint session of Congress.

“Over the course of any social justice movement, there is backlash,” Black said. “You see that several times in this series. And there are ways to confront backlash for a young generation — ways to keep the pendulum from swinging back too far.

“‘We’ is the most important word in the title, because the way to push back and to succeed is to do it together and to understand interconnectedness of social justice movements. I need a young generation to see that and understand that.”

“When We Rise” stars Guy Pearce, Mary-Louise Parker, Rachel Griffiths, Michael Kenneth Williams and a bevy of incredible fresh faces, including transgender actress Ivory Aquino, all of whom vividly portray these real-life courageous souls. Popping up in supporting roles are the outspoken Rosie O’Donnell and Whoopi Goldberg.

The miniseries covers much ground — heartbreaking family rejection; harassment and violence by both police and anti-gay bullies; the AIDS crisis; transgender recognition; children of gay couples; and, in an exuberant finale, same-sex marriage. It accents not just the LGBT fight, but the women’s movement and other civil rights struggle, and the conflicts that sometimes arose between activists.

Its primary focus is on three figures who persevered during horrific downs and exuberant ups to make the world a better place for gay, lesbian, bisexual and transgender Americans.

Cleve Jones (Pearce), a Quaker from Arizona who was spurned by his conservative father (David Hyde Pierce), struck out on his own at an early age and eventually helped lead the gay liberation movement and founded the AIDS Memorial Quilt.

Pearce is wonderful in the part, but just as effective is the curly haired newcomer who plays the fiercely optimistic young Jones. Austin McKenzie is nothing short of captivating in the role.

Also engaging is Emily Skeggs, who plays reticient-turned-fiery lesbian activist Roma Guy. She’s played in her more mature years by Parker. Griffiths plays the older version of Guy’s lover and partner Diane, who defied convention to fulfill her longing to become a mother.

Equally dynamic are Williams and Jonathan Majors as the older and younger versions of gay community organizer Ken Jones, a Vietnam veteran who braved military condemnation, not to mention racism, during his fight for equality.

“From my perspective,” he said, “I see a very divided country, a country in pain, a nation in pain. And we need to be reminded that there’s a lot of stories of triumph, of courage that this country was built on.”

Parker stressed how youths today, who may have no experience with homophobia, should watch and learn.

It may not “hold much currency to a young person — what it is to stand up in church and to say, ‘I’m gay,’ but at the time, when you watch it, it puts ice in your veins. It’s really sobering,” she said. Her kids and others, who enjoy so many freedoms today, should know it’s “a result of the work that these people did,” she added.

“One of the many reasons that a new generation ought to see ‘When We Rise’ is for inspiration and to understand that they have forefathers and foremothers who have been fighting for them for some time,” he said. “For some young people, they need to know that because they’re living in areas where they don’t find a lot of acceptance.”

Back when he lived in San Antonio in the 1970s and ’80s, attending Live Oak Elementary and Kitty Hawk Middle School, Black was one of those young people.

In the past, he’s indicated — in interviews and during his moving 2009 Oscar acceptance speech — that it wasn’t easy growing up gay in a conservative and religious family in military San Antonio.

Back then, as well as today, however, he’s never stopped crediting his mom for always believing in him.

“I love San Antonio,” he said after the ABC press session. “I don’t disparage the way I grew up. There, I was taught the importance of family; that it comes first. There’s a reason I’m in pursuit of children and marriage right now. I learned that from my mom and the South.

”There’s a lot of misinformation out there, which breeds a lot of fear and creates a lot of walls. What I hope to do with this show is to build some bridges that say, guys, you can be gay, lesbian, bisexual and transgender in San Antonio.”