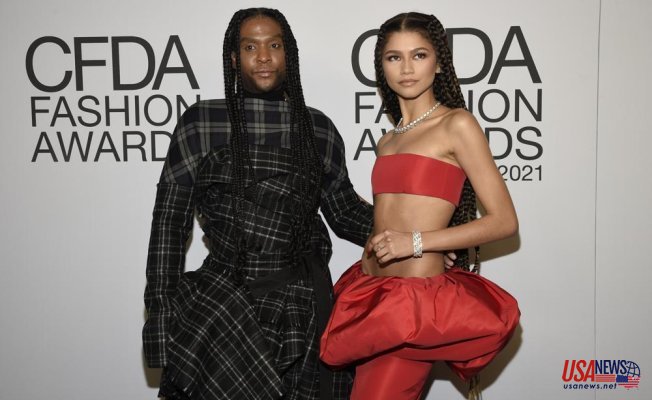 Rogers, 27, was selected by Vice President Kamala Harris to wear a bold purple outfit for her inauguration. She won for womenswear and Bode in menswear at the glittery ceremony, the fashion industry's equivalent of the Oscars. The ceremony was held in person on Wednesday night following a virtual ceremony in 2020 because of the pandemic.

Rogers accepted his award from Emily Blunt. He spoke about coming to New York in 2016 when "nobody would employ me."

Zendaya was awarded the Fashion Icon award, previously announced -- the most prominent celebrity award at the annual event -- for her "global influence on fashion", according to the CFDA. Her clothing line Daya By Zendaya, which was launched in 2013, features "gender-fluid" designs in full-size.

Iman, the 2010 recipient, introduced Zendaya, noting that the recipient was the youngest to receive the award.

Zendaya said that Fashion did something special for her. She cited "the extraordinary gift to transform, the ability to feel confident and embody all these characters, and be literally any character I wanted to be."

Zendaya has been a spokesperson for labels such as Valentino and Lancome. She is currently starring on "Dune" and was nominated for the Emmy for leading actress in drama for her role in "Euphoria."

Beyonce and Lady Gaga were among the previous Fashion Icon recipients.

Anya Taylor-Joy is an actor best known for her role in the Netflix series "The Queen's Gambit." She was awarded Face of the Year this year.

Cara Delevingne introduced Taylor-Joy as the "face that launched a thousand ships of chess sets." Taylor-Joy thanked everyone in the room for "allowing me to learn about fashion," and called it "the greatest education that I could have asked for."

Dapper Dan was awarded the Geoffrey Beene lifetime achievement prize. This Harlem-based designer was first to be awarded the honor.

The CFDA Fashion Awards Guild was formed from members of the CFDA and fashion journalists, stylists, and fashion retailers.