An unsuspecting group of tourists got a trip right into the heart of Hollywood Sunday night that included kisses from Denzel Washington, selfies with Ryan Gosling and a chance to rub a newly won gold statuette called Oscar.Host Jimmy Kimmel told the Dolby... 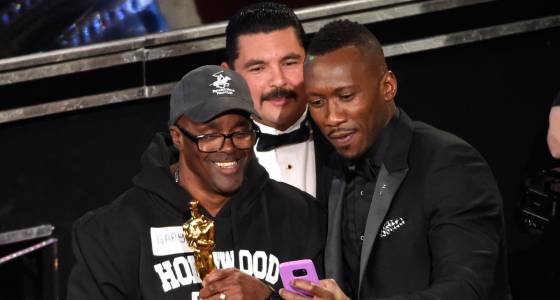 An unsuspecting group of tourists got a trip right into the heart of Hollywood Sunday night that included kisses from Denzel Washington, selfies with Ryan Gosling and a chance to rub a newly won gold statuette called Oscar.

Host Jimmy Kimmel told the Dolby Theatre audience during Sunday's Academy Awards that the group was told they were going to stop at an exhibit of Oscar gowns and tuxedos.

"But we didn't tell them," Kimmel said, "that people would be in them."

The lights went down in the theater, then came up as the group walked in to cheers from Hollywood's royalty.

They were all different ages and ethnicities and most were wearing shorts or sweats or other casual tourist garb. Suddenly they found themselves shaking hands with Nicole Kidman and Keith Urban, who were seated in the front row along with Washington, Gosling and Meryl Streep.

Among the group was Gary Cole of Chicago, dressed in a baseball cap, glasses and a "Hollywood" sweatshirt. When Kimmel learned he was engaged he asked Washington to be his best man. Instead the actor stepped forward and pronounced Cole and his fiancee husband and wife.

The group was so stunned, most were mute at first, but the squeals of glee slowly emerged as they realized their good fortune.

Gosling handed out candy to Cole, who kissed the hands of Kidman and most of the other women in the front row.

At Kimmel's urging, some stars gave the wide-eyed tourists items from their purses. Jennifer Anniston handed over her sunglasses.

Cole appeared to be the night's biggest winner, however. Within minutes he had a hashtag #GaryFromChicago and his hometown basketball team, the Chicago Bulls, offered him free tickets to a game.

Before the group left, Kimmel asked Mahershala Ali, who won for best supporting actor earlier in the evening, if everyone could touch his Oscar on the way out.