Come From Away provides much-needed joy and catharsis for audiences: Timson | Toronto Star

A couple of weeks ago I was sitting in a packed Broadway theatre in New York watching the utterly charming Canadian musical Come From Away.Well, “watching” must be qualified: I was crying — a lot. I was also laughing. And I was certainly... 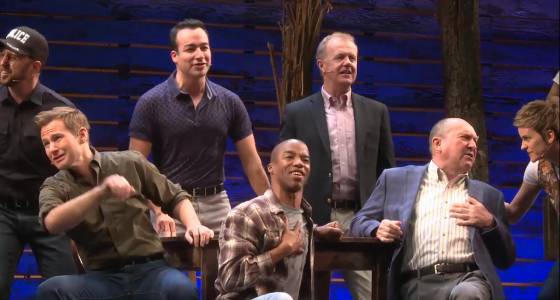 A couple of weeks ago I was sitting in a packed Broadway theatre in New York watching the utterly charming Canadian musical Come From Away.

Well, “watching” must be qualified: I was crying — a lot. I was also laughing. And I was certainly humming along to some pretty great fiddle music.

It was revelatory to be in the midst of Americans — at the very heart of where the terrorist attacks of 9/11 originated — to experience the show.

Come From Away greeted with rave reviews in New York, as Tony Awards buzz starts

Come From Away finds joy in the darkness: review

This critically acclaimed musical, written by Torontonians Irene Sankoff and David Hein, about how the residents of tiny Gander, N.L., responded with love, kindness, shelter and supplies to 6,600 airline passengers and crew stranded unexpectedly for five days on their doorstep when the terrorist attacks of 9/11 grounded all commercial planes, has garnered ecstatic devotees, from its early workshops to its runs in Washington and Toronto.

Now on Broadway, Come From Away is being touted as Tony material and according to the New York Post’s theatre columnist, Michael Riedel, “rapidly emerging as the front-runner for Best Musical. I’ve heard this from four of Broadway’s most powerful producers, all good at picking winners.”

Riedel also added, presumably tongue in cheek, “Expect Gander, Newfoundland, to be Condé Nast Traveler’s top place to visit in 2018.” Get the Legion Hall ready, folks, nothing they can’t handle.

At Come From Away, after the fulsome applause, in the brief snatches of conversation I had with my American seatmates, I heard everything from “yay, Canada” to “we needed this” to a wistful “we are so ashamed of what is happening in our country.”

It was clear that a show which highlights simple human solidarity was providing a kind of catharsis for many audience members.

In fact, if I were a greenlighter — someone or some organization with deep pockets and the power to move artistic projects forward — I would be very interested now in the ones that make joyful, heart-stirring art.

There’s suddenly a hot market for uplift and we all know why.

The world is deeply bruised, from this week’s immediate travesty — the horrific gas attack in Syria with the resulting pictures of gasping dying babies — to the ongoing race-to-the-bottom political saga of Donald Trump in the White House.

People on all sides of the political equation feel battered by the minute-by-minute media coverage of all things Trump.

From tales of “the resistance” to the investigations into Russian intrigue during the campaign, to the general tone of bullying, divisiveness and lack of compassion and trust emanating from the White House, the simple act of watching cable TV — especially what one New York Times writer calls those “Last Supper” panels on CNN — feels like cultural masochism.

Millions are doing it, though, pumping up the ratings for cable, online mainstream media journalism and comedy shows — anything that can help them understand as Trump himself once notoriously said, “what the hell is going on.”

But many of these same people yearn for the opposite, for joy and uplift. I’ve heard people confess they can no longer watch even excellent crime dramas because, well, it hurts their already hurting hearts.

It would be easy to go all Canadian morally superior and say only Come From Away brought them this moment of relief. Its creators call it a tale of “human kindness.”

Come From Away certainly shows, by highlighting the Ganderites’ easy social graces, that you don’t have to “otherize” people, whether it’s a Muslim air passenger just beginning to understand how his life will be changed by 9/11, to a female pilot, to a gay couple who are at first afraid to walk into a Gander bar.

But that’s not the whole story.

That same weekend in New York, I saw the need — and catharsis — in another already mega-successful Broadway hit Beautiful, The Carole King Musical.

Now in its fourth year, the show — a touring version is coming to Toronto — depicts through brief scenes and very familiar songs the early career of prolific singer /songwriter Carole King, now 75.

King not only co-wrote such great girl-group hits as “One Fine Day,” but went on to release Tapestry in 1971, which became one of the bestselling female albums of all time.

In the show, King, now played by Abby Mueller, the sister of Tony award-winner Jessie Mueller, who originated the role, comes across as at first hesitant and held back by being a young woman, but then gradually emerges as a determined and stupendously talented musician.

Again, the audience members around me had uplift on their minds. One woman from New Haven, Conn., when she found out my husband and I were Canadian, asked loudly: “What do you think of what’s going on down here?”

I demurred. My immediate seatmate was a woman from Florida who didn’t give the impression she wanted to talk about Trump. But we all agreed the music was fantastic.

Yet uplift isn’t self-righteous, phoney or preachy. It may not be creatively perfect. You can’t bottle it, and of course no artist can or should assume that as the goal.

But you just know it when you feel it.

Remarkable how unfamiliar a feeling it is in these times.

Judith Timson writes weekly about cultural, social and political issues. You can reach her at judith.timson@sympatico.ca and follow her on Twitter @judithtimson

Judith Timson writes weekly about cultural, social and political issues. You can reach her at judith.timson@sympatico.ca and follow her on Twitter @judithtimson