CaptionClosePARIS (AP) — George Clooney, attending the Cesar Awards in Paris, apparently doesn't agree with President Donald Trump that Paris isn't what it used to be."Yes, no one wants to go to Paris anymore because it's horrible here, apparently,"... 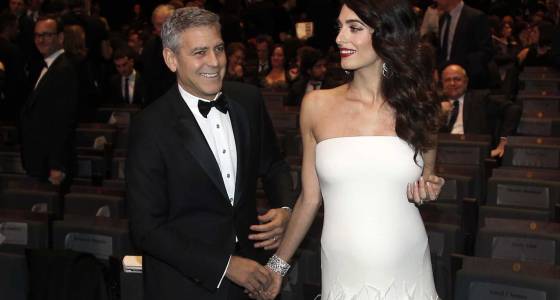 PARIS (AP) — George Clooney, attending the Cesar Awards in Paris, apparently doesn't agree with President Donald Trump that Paris isn't what it used to be.

"Yes, no one wants to go to Paris anymore because it's horrible here, apparently," Clooney quipped with a smile as he stood next to his wife, Amal, on the red carpet. "Well, we have some things to work on in the United States." He added: "I think you guys have some of the same issues here, so good luck."

Clooney was at the Cesar Awards, the French version of the Oscars, to receive an honorary award.

Trump, speaking earlier Friday at a gathering of conservative activists in the United States, said that "Paris is no longer Paris" — due to the threat of terrorism — and that a friend of his never goes there anymore.

Amal and George Clooney are expecting twins in June.