LOS ANGELES—Dwayne Johnson posed for a solo pic on the Dolby Theatre stage. Taraji P. Henson pretended to run off with the wooden prop Oscar. And a makeup-free, casually clad Halle Berry made a rehearsal actor’s day when she kissed him on the... 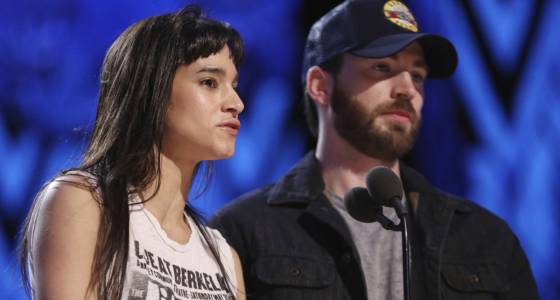 LOS ANGELES—Dwayne Johnson posed for a solo pic on the Dolby Theatre stage. Taraji P. Henson pretended to run off with the wooden prop Oscar. And a makeup-free, casually clad Halle Berry made a rehearsal actor’s day when she kissed him on the cheek as he came onstage to accept an award.

Saturday is rehearsal day for Sunday’s Academy Awards, when a parade of superstar presenters comes through the Dolby Theatre to practice their lines — another famous face every 15 minutes. It’s also casual day at the Dolby, as most stars come dressed down — except for the women’s feet: Many actresses wear their show-day shoes to try them out on the Oscar stage.

Salma Hayek, however, was not dressed down. Wearing all black, from her blazer and blouse down to her stiletto-heeled boots, she looked like she just walked out of a magazine spread.

“OK, let’s do this,” she said from centre stage.

Ryan Gosling and Emma Stone had fun with a microphone sound-check. Stone asked the stage manager if they should begin reading their lines and was surprised to hear her voice amplified to the room.

“Hot mike,” Gosling said, putting his mouth on the microphone.

“Sibilance,” Stone responded, invoking an old “Wayne’s World” sketch as she leaned into the mike.

Judd Apatow accompanied wife Leslie Mann to her read-through, and he documented the experience with his cellphone. He shot photos of Mann on stage and took pictures of her seat-saving placard. He also helped write her script for Sunday.

“I think we’re going to fix it up a little bit and practice for tomorrow,” Mann told a stage manager.

From Pearl Harbour to 9/11, how the Oscars respond to political turmoil

Vince Vaughn also plans to write a portion of his Sunday night script, he said from the stage Saturday.

When she finished her lines, her daughter came to meet her onstage, but nearly tripped on the way up.

“Her and Jennifer Lawrence, you know,” Adams joked, referencing Lawrence’s fall on her way to accept her Oscar in 2013.

“Fifty Shades of Grey” stars Dakota Johnson and Jamie Dornan looked out from the stage to try to find their seats in the theatre, all marked by photo placards.

“I’m probably up there,” Dornan said, pointing up to the balcony. (He’s actually seated near his co-star.)

Brie Larson wore an ACLU T-shirt under a denim jacket to rehearsals. Kate McKinnon paired black leggings and grey hoodie with towering black platforms, worn over socks. Samuel L. Jackson kept things relaxed, wearing a grey tracksuit and backward ball cap. He snapped a few cellphone photos of the stage after running through his lines. Scarlett Johansson didn’t bother with heels. She wore clogs with her black pants and white moto jacket, and took a moment to admire the stage when she walked onto it.

Jason Bateman was in a joking mood. When a stage manager told him not to read the teleprompter lines in red, Bateman replied, “I say it louder, right? That’s why it’s in red.” David Oyelowo made rehearsals a family affair: his wife and four children sat in the theatre as he rehearsed.

But the presenters who had the most fun at rehearsals were the stars of “Hidden Figures.” Henson and supporting actress nominee Octavia Spencer were all giggles onstage.

“I’d like to thank the academy for opening the curtains for such a grand entrance,” Spencer said, putting on a British accent.

“It was my idea!” Henson shouted. “Right, academy?”

“She’s the straight man in this group,” Henson told a stagehand. But not so straight that she wasn’t willing to strike a “Charlie’s Angels”-style pose with Henson and Spencer when the curtains opened to reveal the women onstage.

They practiced their entrance before presenting the prop Oscar. As Henson handed it to the fake winners, she said, “You’re amazing. Hire me!”