‘Breath in Between’ tries to wake audience but only confuses: review | Toronto Star

Breath in Between Written and directed by Anton Piatigorsky. Until March 11 at Streetcar Crowsnest, 345 Carlaw Ave. Crowstheatre.com or 647-341-7390.In the first several minutes of this troubling production, a man holding a knife (Kyle Gatehouse), tells the... 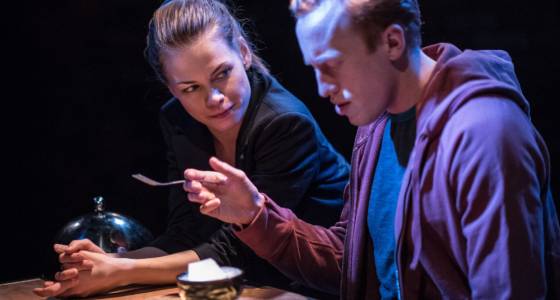 Written and directed by Anton Piatigorsky. Until March 11 at Streetcar Crowsnest, 345 Carlaw Ave. Crowstheatre.com or 647-341-7390.

In the first several minutes of this troubling production, a man holding a knife (Kyle Gatehouse), tells the audience that he advertised on the internet for people to kill. Two answered, and after coffee he killed them.

The man, Roger, also declares that “it is easier to drop a bomb on Hiroshima than it is to hammer a baby in the skull;” that when he was a child, his religious father showed evidence of his gentleness by stomping an injured hummingbird to death; and that when he was 17 his father killed him during a confrontation over authority.

Something very extreme is going on in Anton Piatigorsky’s play about moral relativism; behaviour, belief, and responsibility in the digital age; the positive and negative potentials of intimacy; and parenting. In its preoccupation with actual and symbolic violence Breath in Between echoes the 1990s “in-yer-face” theatrical movement, in which writers including Sarah Kane and Mark Ravenhill controversially depicted extreme acts of sex, aggression, and brutality.

At its best, such work used transgression and the challenging of formal theatrical norms to wake spectators up to all kinds of societal hypocrisies. Toronto theatres continue to produce British and American writers working in this vein including Tracy Letts, Philip Ridley, and Dennis Kelly; the ongoing slippage between embodied life and mediation and between truth and its alternatives provides context for its appeal.

Unlike many of these writers, Piatigorsky is attempting the tricky and perhaps admirable task of invoking extreme acts without enacting them. Violence is not literally depicted in the play, but any number of horrible activities and images are talked about.

Turning this level of provocation into critique requires skills which Piatigorsky, from the evidence provided here, does not yet possess. A central concern is that this award-winning playwright is directing his own work for the first time, taking over directorial duties from Brendan Healy, who helmed an earlier version of the play at SummerWorks in 2012.

Piatigorsky’s production does not sufficiently establish and maintain a representational contract with the audience. Is Roger really dead — are we in the fashionable realm of zombie horror — or did his dad symbolically kill him? In the absence of further evidence of undeadness, the latter eventually seems the case, but this is one of any number of ambiguities that stack up to the point of blocking audience engagement rather than productively challenging assumptions.

At this point and others, the actors attempt to offer psychologically committed, emotion-driven acting; Krauss is more successful then Gatehouse in bringing us into the complexities of her character’s thoughts and feelings. But Piatigorsky hands them and the audience further challenges by layering on more styles.

At one point, for example, Amy cooks Roger live hummingbird heart and a steak that she says is her own heart. Considerable theatrical know-how has been devoted to the physical presentation of these meals as gelatin shapes on platters, glowing from within and making beating noises (lights are by Kaileigh Krysztofiak, sets by Shannon Lea Doyle, sound by Richard Feren).

But what’s intended by this sort-of literalization of the heart metaphor? Is this a demonstration of Roger and Amy slipping into shared delusion, or an attempt at expressionist externalization of an internal state — something extended through the image of ice spilling out of both of their insides?

A further confusion is the terms on which the production addresses the spectator: initially Roger talks to us directly, then he and Amy play naturalistically and we’re just looking in, then Amy starts talking to us too. There’s a voice-over that at first seems to represent Maxim and Laura — the people he killed — but then it might be police interrogation. There’s a similarly uncertain trope about Roger and Amy putting on masks to impersonate Maxim and Laura, which ends in an overextended metatheatrical exorcism sequence.

Perhaps all this is intended to dramatize a push-pull of control but it is not clear between or within whom — Roger himself? Roger and Amy? The victims? An external narrator or societal voice? There are some references to Memphis and Las Vegas, and Roger eventually ends up in the concrete space of a jail cell; if this is intended as a specific commentary on the U.S. culture or its judicial system and if Canada is somehow implicated, are further unclear points.

Production values are very strong in this Crow’s Theatre production, the second in its intimate Scotiabank Community Studio; Feren’s sound design in particular is masterful. But this misguided project raises questions about the level of artistic support and intervention Crow’s provided. Everyone’s overexposed here and nobody wins, including the audience.