Some theme park fans visiting China set off a social media tiff this week by tweeting photos of what they said were scalpers selling Fastpasses at Shanghai Disneyland. Allegedly, people have been collecting Fastpasses on the new park’s most popular... 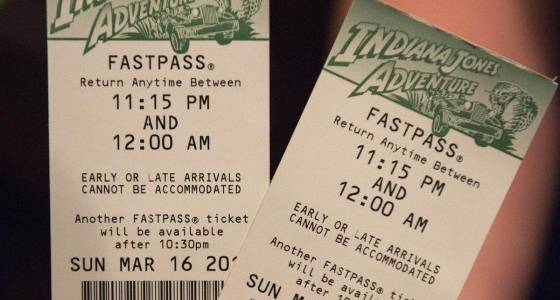 Some theme park fans visiting China set off a social media tiff this week by tweeting photos of what they said were scalpers selling Fastpasses at Shanghai Disneyland. Allegedly, people have been collecting Fastpasses on the new park’s most popular rides, such as Soarin’, and selling them for about $15 a pair to people who couldn’t get the ride reservations on their own.

Now I imagine that there might be some desperate theme park fans out there saying, “$15 for a couple of Fastpasses to Radiator Springs Racers on a busy day? I’d take that deal.” Which leads me to wonder ... why don’t we see more ticket scalping at Disneyland?

Disneyland and other theme parks have avoided the ticker resellers commonly found outside stadiums and Broadway theaters by flooding the market. Think about it: The Angels play 81 regular season home games a year, but Disneyland is open for all 365 days. Both can accommodate roughly the same number of people at once, but Disneyland can get more people inside the park on a single day by staying open from morning until midnight. When was the last time the Angels scheduled a double-header for a single ticket?

And not every home game for the Angels is the same. How many people would rather watch the Red Sox when they visit instead of the Twins? That’s why you can resell an Angels-Red Sox ticket for way above face value, but no one’s getting more than list price by reselling legitimate Disneyland tickets.

That’s not to say that some people haven’t tried. Every year, when Mickey’s Halloween Party starts selling out certain nights, you can find people asking online if they can buy someone’s tickets and offering to pay above face value for them. With a limited supply of people allowed to attend each night, a Mickey’s Halloween Party admission is a lot more like one of those Angels-Red Sox tickets than a “normal” Disneyland ticket.

They created computer programs to monitor Disney World’s reservation systems and note when someone would drop a reservation at a hard-to-book restaurant. Other fans then paid the programmers to be alerted when those reservation times became available, so they could jump in and claim the reservation without having to spend all their time checking with Disney themselves.

It’s not technically “scalping,” per se, because no one is reselling the reservations. But it was a way that a third party could extract some money as a middleman between Disney and its guests. Disney eventually stepped in and shut down some of the services.

Also at the Walt Disney World Resort, Disney eliminated paper Fastpasses and now ties return times to your theme park ticket, making the type of selling allegedly going on in Shanghai impossible. But Disneyland still uses paper Fastpass tickets - at least, for now - so why hasn’t someone tried the same thing here?

It might be that few attractions in Anaheim see all their Fastpasses go away early in the day, the way they often do at the Shanghai park, which has only about half the number of attractions as Disneyland. Shanghai’s a new market for Disney, too, so presumably visitors there aren’t as familiar with Fastpass and might not know how to use the system the way that Disney fans in America do.

Or maybe people are selling Fastpasses here, but keeping it hidden enough not to be caught. Regardless, I know this – if Disney sees that a lot of people are willing to pay a lot of money for Fastpasses, the only party that Disney legally will allow to sell those Fastpasses will be ... Disney.

Robert Niles is the founder and editor of ThemeParkInsider.com.