'Moonlight' wins Best Picture after an epic Oscars flub, and Twitter has a field day (w/video)

Steve Harvey. Hanging chads. Dewey vs. Truman. 7 Hours Ago5 Hours Ago11 Hours AgoWhile so many watched in shock as Warren Beatty and Faye Dunaway mistakenly announced La La Land as the Best Picture winner at the Academy Awards — only to realize they read... 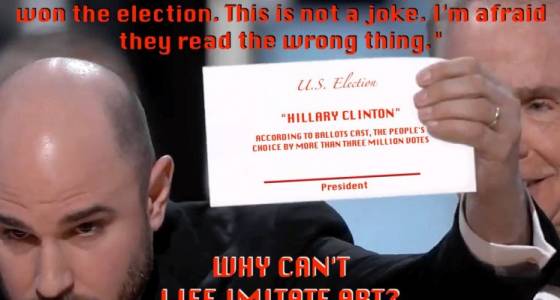 While so many watched in shock as Warren Beatty and Faye Dunaway mistakenly announced La La Land as the Best Picture winner at the Academy Awards — only to realize they read the wrong envelope and Moonlight actually got the prize — Twitter exploded with all sorts of funny reaction.

It hasn't stopped as of Monday morning, as #oscars is blowing up.

Apparently some folks slept through the proceedings — including Harvey, who famously flubbed the Miss Universe announcement in 2015.

Those who were awake, though, panned the snafu by reminding of some other memorable gaffes, while coming up with the obligatory "blame the Russians" accusation and imagining if the envelope contained some other wishful information (read: Hillary Clinton Wins Election).