'Moonlight' is the big winner at the Film Independent Spirit Awards

As she took the Spirit Awards stage to present an acting ensemble prize to “Moonlight,” “Scandal” star Kerry Washington ‎was struck by a moment of spontaneous emotion.‎“Oh dear Lord, I love this movie,” she said.She wasn’t... 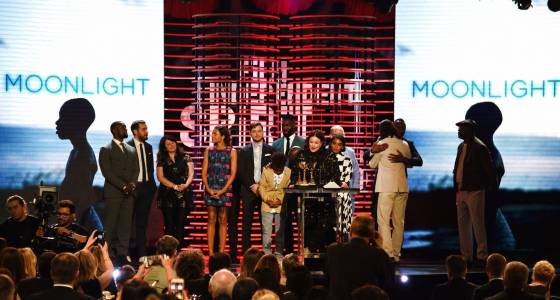 As she took the Spirit Awards stage to present an acting ensemble prize to “Moonlight,” “Scandal” star Kerry Washington ‎was struck by a moment of spontaneous emotion.‎

“Oh dear Lord, I love this movie,” she said.

Barry Jenkins’ tale of a young gay boy coming of age won six awards, including the top prizes of feature and director, as “Moonlight” captivated the Spirit Awards on Saturday, much as it has critics and moviegoers throughout the awards season.

A warmth emanated from both the audience (multiple standing ovations) and the stage (a trading off of acceptance speeches among many of its principals) as “Moonlight” racked up the honors.

“I come from a little neighborhood that little people know,” Tarell Alvin McCraney, the playwright on whose semi-autobiographical work the movie is based, said about the hardscrabble part of Miami that is the film’s setting. “[This is] a story worth telling and sharing.”

Washington put it another way: “We didn’t know that we wanted ‘Moonlight,’ but now that it’s here, we know that we needed it, and in witnessing it, we are forever transformed.”

Run by the Los Angeles-based Film Independent, the Spirit Awards are an antidote — and in recent years increasingly an adjunct — to the Oscars, which take place the next day. The ceremony as usual was held under a big tent on the beach in Santa Monica.

After long deviating from the Oscars — only one common best picture winner in the first 26 years of existence — the Spirit Awards lately have become a bellwether for the elaborate Hollywood ceremony. In the past five years, the groups have overlapped in the top category four times, including last year’s winner, “Spotlight.”

That consensus could be a tougher feat to replicate this year, as Oscar best picture frontrunner “La La Land” exceeded the budget ceiling of $20 million and wasn’t eligible for the Spirits.

‎Among other top awards Saturday, lead actress went to longtime prestige-cinema favorite Isabelle Huppert for her turn as an unconventional rape victim in “Elle,” as the French performer continued a run that‎ began with her Golden Globes upset.

“Manchester by the Sea” star Casey Affleck, meanwhile, scooped up actor honors, assisted by the absence of main Oscar rival Denzel Washington, whose “Fences” was also ineligible for budget reasons.

Yet the issue of awards forecasting was almost beside the point. At a moment when rancorous politics ‎have dominated national headlines, the Spirits were content to put their own spin on current affairs, highlighting inclusion and celebration rather than diatribe and protest.

The show brought a smattering of political comments (Affleck noted that “the policies of this administration are abhorrent and they will not last”), while hosts John Mulaney and Nick Kroll took a few shots at the current White House occupant.

But the humor also contained a dollop of self-awareness. Joked Kroll, “If this room leaned any further to the left we would literally topple into the ‎Pacific.”

Maybe more important, some winners used subtlety in expressing their perspective on the political climate: In accepting the John Cassavetes award for a micro-budget film, Andrew Ahn, director of the Koreatown-set gay drama “Spa Night,” said, ‎”This is so meaningful, that this award is going to a film about a Korean American immigrant family, about queer Korean American people.”

He added: “Now more than ever, it’s so important that we support stories told by and about communities that are marginalized…. We are part of this great country, and we are undeniable.”

“Moonlight” producer Adele Romanski noted that‎ all the films being lauded and discussed recently “really speak to this appetite and this need for stories that are bold and defy easy categorization. And I think people are telling us that’s what the‎y want to see.”

The wins for “Moonlight” were also a triumph for A24, the New York-based upstart distributor, which also won two debut-film prizes for its Puritan-set horror film “The Witch.”

“Moonlight,” which has garnered $21 million at the box office, has been a favorite since it premiered at the Telluride Film Festival in late summer. Its story behind the camera — of a playwright whose work was not widely staged, and a director who had gone many years between films — is now well known.

That lore contributed to the goodwill at the ceremony as did its consciousness-raising message of understanding, made more topical by Trump-era divisions.

Jenkins, speaking about his collaborators but in a sense also talking to the room and viewers tuning in to the live broadcast, summed up that feeling.

“This thing [statue] has my name on it,” he said in his acceptance speech. “But it’s absolutely about all y’all.”