CaptionCloseThis gallery is a selection of some of the best moments captured during Carnival celebrations by Associated Press photographers across Latin America and the Caribbean.The highlight of the year for many in Brazil is Rio de Janeiro's over-the-top... 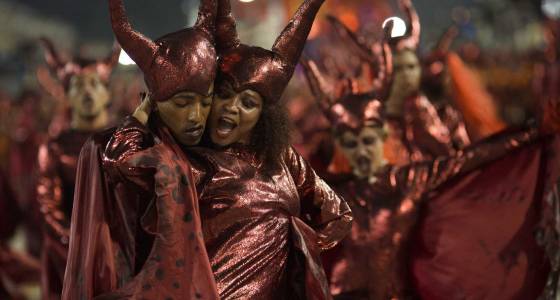 This gallery is a selection of some of the best moments captured during Carnival celebrations by Associated Press photographers across Latin America and the Caribbean.

The highlight of the year for many in Brazil is Rio de Janeiro's over-the-top party and competition at the famed Sambadrome. This year featured sensual red devils, the classic high-heeled women in barely covering outfits of feathers, singing performers with instruments, and people in large dresses spinning across the floor to impress the judges.

There was plenty of action outside the famed stadium, too. While the city's elite held a private bash in tuxedos and cocktail dresses resembling the "Great Gatsby" era, outside in the street a scrawny young boy sold cans of spray foam to partiers at an anti-government Carnival protest and costumed patients from a mental hospital sat dazed on the sidewalk.

Men in blue beards partied in the streets as did a half-man, half-unicorn and "Mike" the boxing dog. People in costumes from "The Simpsons" and "Wonder Woman" brought color to the subway, and one man squeezed in a power nap along the parade route.

In other parts of Brazil, muddy men bonded over beer and celebrants in rural areas honored traditions dating back to the country's sugar plantation days.

Outside Brazil, rum-fueled parties and high-energy dance music gave life to a city in southern Haiti still recovering from last fall's punishing Hurricane Matthew. An elderly couple in Panama showed up in bride and groom costumes. In Oruro, Bolivia, local people in colorful horned costumes performed the "Dance of the Devils," a celebration that has developed over more than 200 years to blend pagan and Roman Catholic religious practices.