After an electrifying World Series, spring training has a little extra spark this year. Will you be there?

The Chicago Cubs’ dramatic come-from-behind win to clinch the 2016 World Series electrified baseball fans, and the energy it generated promises to carry over to spring training for those who come to watch the Dodgers and Angels in Arizona’s... 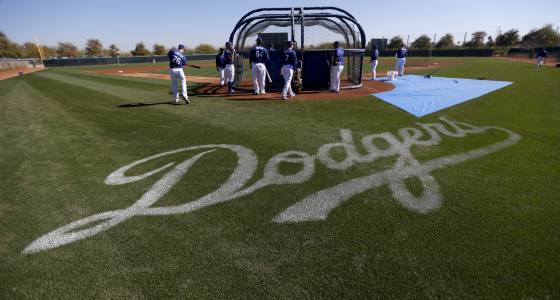 The Chicago Cubs’ dramatic come-from-behind win to clinch the 2016 World Series electrified baseball fans, and the energy it generated promises to carry over to spring training for those who come to watch the Dodgers and Angels in Arizona’s Cactus League.

The games also give fans a chance to get an early look at up-and-comers; you may recall, for instance, a shortstop named Corey Seager who wore Dodger blue in spring 2015. Seager was the National League West’s rookie of the year for 2016.

The lineage of Dodgers representatives in the All-Star game is acknowledged with a series of oversize baseball card panels lining the Legends Walk along the park’s man-made lake.

Morning workouts begin around 9 a.m. and are open to the public free of charge. Single-game ticket prices at Camelback Ranch start at $10 per game.

With five years left on his 10-year contract, Pujols could surpass Barry Bonds on the all-time home-run list. He slugged 31 homers last season.

Diablo Stadium has been in continuous service longer than any of the Cactus League’s 10 venues. It dates to 1968 and underwent renovations in 1993 and 2006.

The Angels have spent their spring training time in Arizona since 1982 but didn’t start their annual regimen of preseason games until 1992. (They were included in the league from a distance when they held spring training in Palm Springs from 1966 to 1982.)

Tickets for Angels games at Diablo start at $15. Info: www.lat.ms/angelsspring

Dodgers fans will have a chance to see the Chicago Cubs, the team that knocked them out of World Series contention, when they meet on Saturday at Sloan Park, about 20 miles from Phoenix.

On March 16, the Cubs will make their only appearance at the Camelback Ranch against the Dodgers.

The World Series champs will face the Angels on Chicago’s home-away-from-home turf in Mesa on Tuesday and again in Tempe on March 6.

And what of the Southern California rivalry between the Dodgers and the Angels? They’re  scheduled to face off at Camelback on March 11 and again on March 13 in Tempe.

The two teams close out the spring training season with a three game series March 30-April 1. The first two games take place at Angel Stadium and the finale at Dodger Stadium.

You can’t spend all your time at the park. Here’s a look at respites from the old ballgames.

The sprawling 440-acre property, built in 1929, has 54 holes of championship golf courses.

About 20 minutes from Camelback Ranch, historic downtown Glendale is a stretch of old-world charm in the middle of a rapidly expanding modern city, featuring European-style restaurants such as Haus Murphy’s (5739 W. Glendale Ave.; [623] 939-2380, www.hausmurphys.com; entrees $13-$19). This traditional German biergarten serves oversize steins of imported German brews and Bavarian specialties such as sauerbraten, goulash and more than half a dozen schnitzels, sausages and giant pretzels, often accompanied by live polka music in the evening.

The neighboring Gaslight Inn (5747 W. Glendale Ave.; [623] 934-5466, www.gaslightinnaz.com; doubles from $278 a night for two-night stays) bed and breakfast is one of the city’s oldest buildings. It contains 10 uniquely appointed rooms and the Olde Towne Glendale Wine and Beer Bar and art gallery.

The AC Hotel Phoenix Tempe/Downtown (100 E. Rio Salado Parkway; [480] 642-6140, www.lat.ms/marriotttempe, doubles from $260 a night) is a boutique-style hotel adjacent to the Tempe Town Lake on the Arizona State University campus in the heart of downtown Tempe.

The ASU campus and downtown Tempe are bustling with nightlife, bars and restaurants. The Taste of Tops (430 W. University Drive, an extension of Tops Liquors) offers a sophisticated rotation of 31 microbrews, imports and locally brewed draft beers and hundreds of bottled beers.

Ready to slake any fan’s thirst, Arizona Brewery Tours (www.azbrew.com/home) provides worry-free, guided bus tours from one microbrewery to the next. Tours are offered on comfortable shuttle buses, making stops at local taprooms and breweries in Mesa and throughout the greater Phoenix metro region. Prices per person from $79.

Downtown Phoenix has experienced a renaissance in recent years. The new Found: RE, a sleek, industrial-style boutique hotel (1100 N. Central Ave.; [602] 875-8000, www.foundrehotels.com, doubles from $249) is centrally located near the city’s arts and cultural district and fits right in with the city’s new vibe. The hotel’s Match Cuisine and Cocktails features an open kitchen with a wood-fire oven and global street-inspired menu of tapas meant to be shared, with dishes that start at $12.

Robinson played his first major league game for the Brooklyn Dodgers in 1947.

Four pioneering African American players who were among the first to integrate spring training baseball in Arizona were inducted into the Cactus League Hall of Fame at the league’s annual luncheon last week. The honorees: Larry Doby, the American League's first black player; the New York/San Francisco Giants’ Monte Irvin and Willie Mays; and Ernie Banks of the Chicago Cubs. Mays, the only one still alive, attended the ceremony.

The Arizona Spring Training Experience (an ongoing traveling exhibit created  by the Mesa Historical Museum) explains the history of the Cactus League using a vast collection of photos, artifacts and memorabilia.

The museum installation is on display at the Scottsdale Public Library (www.scottsdalelibrary.org) free of charge through April 4.