A village in Afghanistan is the story of a girls' school

Mina Ahmed uses a cement mix to reinforce her home in rural Afghanistan after being displaced by war. 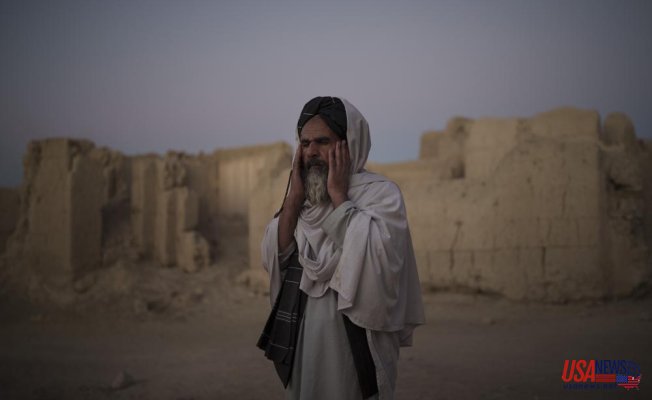 Her hands are swollen from the labor but she is happy for the new era under Taliban rule.

One time, she was worried about the group's strict style of rule in Salar. But, being in the middle of a war that lasted two decades has given her new perspective.

Taliban control has its limits, even for women. That is okay, said the 45-year old. These restrictions allow us to live our lives, at the very least.

She does draw a line at one point though: Her daughters, aged 13 and 12, must attend school.

From a bird's-eye view, Salar appears to be hidden against the towering mountains of Wardak province. This community of about 700 people is located nearly 70 miles away from Kabul. It serves as a microcosm for Afghanistan's latest chapter -- the second round under Taliban rule -- which shows what has changed since their time at the helm in late 1990s.

Salar residents, who have been held by the Taliban for the past two-years, now embrace the stability of the U.S. military's victory over the insurgents and its Afghan allies. Many of those who were forced to flee fighting are now returning home. They fear an economic crisis that will worsen and a drought which will be felt in a province where the harvest is the mainstay of life.

Public discontent towards the Taliban in Kabul and other cities is focused on the threats to individual freedoms, including women's rights.

These words barely make sense in Salar. It is not difficult to see the ideological divide between the Taliban leadership, rural conservatives, and their followers. Many villages supported the insurgency, and they celebrated the Aug. 15, 2005 fall of Kabul, which established Taliban control throughout the country.

However, there are positive changes happening in Salar. The village insists on a local elementary school for girls.

This insistence pushed the Taliban to accept a small school that was funded by international donors. The school's future -- whether it becomes a formal public school that opens the doors to higher education or a religious madrasa -- is still uncertain.

At 8 a.m. 38 young faces are covered in veils and seated on a floor with carpeted floors looking up at Qari Wali Khan, their teacher. He calls upon the girls to read the Quran with a stick in their hands and furrowed eyebrows.

Rokia (10 years old) is the first unlucky. Wali Khan interrupts and corrects her pronunciation. He interrupts her by exclaiming, "Afarin!" -- in Pashtu, "Excellent!"

Two months ago, the school opened. This marks the first time that girls from the village have ever been in a classroom or similar setting for 20 years. Lessons are held in Wali Khan’s living room, as there is no building.

These classes result from U.N. negotiations between the Taliban.

The U.N. started work in 2020 on a program to establish girls' learning centres in remote and conservative areas. This included those under Taliban control, such as the Sayedabad district, where Salar is situated.

Although the Taliban interlocutors initially resisted the idea, an agreement was reached in November 2020 by Jeanette Vogelaar (UNICEF's chief education officer). For the financing of 10,000 centers, international funding was secured at $35 million per year for three years.

COVID-19 delayed launch. The Taliban took control of Kabul by the time the centers were due to open. They allowed the project to proceed, even though they used the curriculum from the previous government -- although they insist on gender segregation, female teachers, and more Islamic learning.

Wali Khan, a madrasa teacher, was hired in Wardak as the most educated women have left the city.

This program allows girls to finish six grades without any formal education in just three years. They should be ready for Grade 7 when they are done.

They are not sure if they will continue to do so. The Taliban have banned girls aged 12-17 years from attending public schools in most districts.

Vogelaar stated that it is a good start. She said that the Taliban behave differently now than they did before.

Ten years ago, the Taliban led a campaign against Wardak government officials. They had a particular hatred for campaigners for girls' education. Two village elders recounted Mirajuddin Ahmed's shooting death, Sayedabad’s director of education. She was a vocal supporter of girl’s access to education.

In 2007, several public schools for girls were destroyed in the province. Today, there is not one.

The times have changed.

Abdul Hadi Khan, a village elder, said that girls will not be allowed to attend this school now.

These shifting attitudes could be part of a larger trend to support education. When the Taliban were at their last power in 2000, only 100,000 girls were enrolled in school out of 1 million pupils. According to the U.N., they now number 4 million of 10 million schoolchildren.

Salar's villager friends wanted nothing less. They persuaded Wali Khan to be a teacher.

He said, "They trusted me and told me that this was a necessary part of our society."

This might have been one of the reasons why the Taliban chose to cooperate. With the economy in disarray, they couldn't risk alienating the support group that supported them during the insurgency.

The Taliban could influence the education system, raising concerns. Vogelaar stated that the U.N. knows that Taliban infiltrate villages and insist on Islamic studies.

It is supported by most families. Sayedabad district is dominated by Afghanistan's Pashtun dominant ethnic group. This is where the Taliban are most likely to be drawn. Daily village life is dominated by religion and conservatism.

Vogelaar said that a madrasa-type education was not the goal.

Wali Khan claimed that he was given specific instructions by the Taliban-controlled education department in Sayedabad to include more religious studies in the curriculum. He followed orders.

Wali Khan was visited by officials from the Taliban in late October. They wanted to see how the classes were doing.

He said to them, "The girls have a hunger for learning."

Sima, 12, runs home after class. She whizzes past Salar's mud brick houses and leaves behind a trail of dust.

Nisar is her father and he is away picking tomatoes in fields for 200 afghanis ($2.5). He is the only breadwinner.

Mina believes it will take a while before her house is restored to its former glory.

She is slowly rebuilding, purchasing cement bags at $1 each whenever possible. She owes close to 100,000 afghanis (1,100) to her relatives and friends.

A month ago, the family returned to their home. One of the four rooms in the house was not usable. Bullet holes remain in the walls.

They fled the village more than 11 years ago and moved to another side. Their home, on an incline overlooking Highway One which links Kabul to the south, was too dangerous. It was also a hotbed for insurgent activity during the war.

She distinctly recalls being outside in the cold while American troops searched their home for insurgents. In 2007, it was common to see army convoys ambushed on the highway. Mina witnessed army tanks go up in flames from her kitchen window many times. Two of her brothers-in-law died.

Mina's house is above the ruins of an Army checkpoint. It was occupied by the Afghan army for 18 years until the Taliban seized the area in 2002.

Mina is making slow progress on the house, but she fears for what happens when temperatures drop and prices rise.

Afghanistan is currently in an economic crisis due to the U.S. freezing assets of Afghans as part of international sanctions against Taliban. Foreign aid, which once accounted 75% of the state's expenditures, has also been halted.

Mina has six kids and all of them need to be fed.

Everybody who has ever returned to the country has a similar story.

Mahmad Rizak (38), standing outside his house with a cement-flecked face, said, "You won’t find one person here who is in good condition."

Food insecurity is a serious problem. The only hospital in the area, Mohammed Khan Hospital, is experiencing an increase in malnourished infants who are crying in the maternity ward.

An unusual collection of mementos is displayed on the wall in the surgical ward. It contains bullets and kidney stones taken from patients, one from war and the other from poor water quality.

Dr. Gul Makia said, "Tells all about this place."

Many people whose livelihoods depend on tilling the soil and raising livestock are left without a source of income due to drought.

October will end, which means that tomato picking season will end, and Nisar won't be able to work.

He mixes cement with his wife.

He points out the area that was once occupied Afghan soldiers and Taliban insurgents. "My daughter will one day become a teacher, and we will turn this into a school to teach other girls."

He said, "She will become our pride."