A snafu for the ages tops Oscar's notable moments

CaptionCloseLet's hope they all just went out and had a stiff drink together and laughed about it.As for us, forget everything that came before it — the political barbs and the calls for inclusiveness, the emotional crescendos and the floating cookies.... 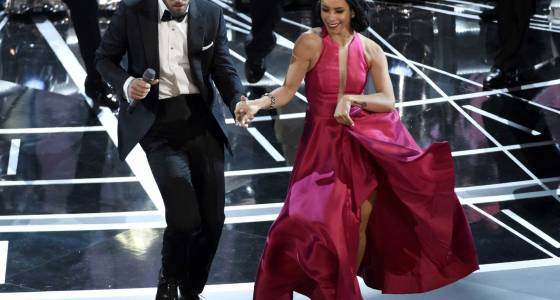 Let's hope they all just went out and had a stiff drink together and laughed about it.

As for us, forget everything that came before it — the political barbs and the calls for inclusiveness, the emotional crescendos and the floating cookies. The moment we'll be discussing for years to come will be the Great Mistake of Oscars 2017, when "La La Land" was shockingly named the best picture winner, to be corrected only after the film's producers had made joyful speeches. Only then was the rightful winner, "Moonlight," announced.

Here's are some of the evening's most notable moments — ending with the big one:

A DANCE PARTY TO START

Justin Timberlake had promised a politics-free opening and he delivered, getting the party going with a high-energy medley. He started in the lobby and danced through the aisles as he sang his Oscar-nominated song "Can't Stop the Feeling," high-fiving people like Denzel Washington and getting A-list actors up and dancing. Kimmel joked that if Timberlake's former 'N Sync bandmates were watching, they'd probably let him back into the band.

AN OVATION FOR "OVERRATED" MERYL

In his monologue, Kimmel made pointed barbs about nemesis Matt Damon, and the age of best director nominee (and eventual winner) Damien Chazelle, 32, of "La La Land." But he saved his most pointed jokes for the actress President Donald Trump famously called "overrated" — the much-decorated Meryl Streep, nominated for the 20th time. Kimmel said Streep had "stood the test of time for her many uninspiring and overrated performances" and "phoned it in for more than 50 films." Streep, who has been unstinting in her criticism of Trump, received a standing ovation.

She said only two words — "thank you" — but it was a stirring moment. Former NASA mathematician Katherine Johnson, 98, an inspiration for the film "Hidden Figures," was wheeled onstage to a thunderous ovation. She was introduced by Taraji P. Henson, who played her, and the other two actresses who played female black mathematicians in the Oscar-nominated picture, Octavia Spencer and Janelle Monae.

A HISTORIC NIGHT FOR VIOLA DAVIS

Viola Davis gave one of the more emotional speeches of the night when she won best supporting actress for "Fences."

"I became an artist, and thank God I did, because we are the only profession that celebrates what it means to live a life," she said, in tears.

Davis had previously won a Tony award in the same role in the August Wilson play, also starring opposite Denzel Washington. "Here's to August Wilson who exhumed and exalted the ordinary people," she said.

If there was extra applause for the sound editing award, it was because Kevin O'Connell had won on his 21st try — after not being in contention since 2007. It had been the longest losing streak in Oscar history. O'Connell won for his work on "Hacksaw Ridge."

"I can't even tell you the experience that it was for me," O'Connell said backstage, of finally winning. "It's the greatest feeling I've had in my entire life."

A POLITICAL SPEECH, IN ABSENTIA

The most political speech of the night came from a winner who wasn't present. When "The Salesman" from Iran, directed by Asghar Farhadi, won best foreign-language film, Iranian astronaut Anousheh Ansari accepted the award on his behalf; Farhadi had stayed home to protest Trump's travel ban. "My absence is out of respect for the people of my country," Farhadi said in the statement, "and those of other six nations who have been disrespected by the inhumane law that bans entry of immigrants to the U.S."

It was the second Oscar for Farhadi, who previously won in the same category for "A Separation" in 2012.

"Dividing the world into the 'us' and 'our enemies' categories creates fear," he said. "A deceitful justification for aggression and war."

GARY GETS HITCHED — SORT OF

Not all Hollywood bus tours are worth their while. THIS one was.

An unsuspecting group of tourists got a trip right into the Oscar ceremony Sunday night. Kimmel told the Dolby Theatre audience that the group was told they were going to stop at an exhibit of Oscar gowns and tuxedos. "But we didn't tell them," Kimmel said, "that people would be in them."

The lights went down in the theater, then came up as the group walked in to cheers from Hollywood's royalty.

Among the group was Gary Cole of Chicago who quickly became a trending hashtag on Twitter — #GaryFromChicago — and the Chicago Bulls offered him tickets to a game.

At the Golden Globes, they serve dinner. At the Oscars, people are hungry. And so Kimmel and producers delivered candy, popcorn, and later, cookies too, which came soaring down from the rafters in little bags. Kimmel quipped that maybe to save time, the Oscars should be handed out this way next year. (Would that have prevented the best-picture snafu, one wonders?)

Winners often thank their moms, but Benj Pasek, one of the best original song winners from "La La Land," had an especially endearing shoutout for his mother. "I want to thank my mom who is amazing and my date tonight and she let me quit the JCC soccer league to be in a school musical," he said. "So this is dedicated to all the kids who sing in the rain and all the moms who let them." Another mom who had a good night: Lin-Manuel Miranda's, who heard Kimmel announce to the world that her son was an American national treasure. (Miranda, an original song nominee for "Moana," was denied his EGOT, however, when he lost to "City of Stars" from "La La Land."

Yes, Chazelle won best director for his exuberant direction of "La La Land." Casey Affleck won best actor for his searing performance in "Manchester By the Sea," and Emma Stone for her luminous work in "La La Land." But then ... came that mess-up of blockbuster proportions, when Warren Beatty was somehow handed the wrong envelope. Now we know why Beatty had such a strange look on his face as his presenting partner Faye Dunaway read the name of the winner — "La La Land." Then came the correction, and gasps, and whistles, and general chaos.