A Rutgers filmmaker's controversial movie about race could win an Oscar 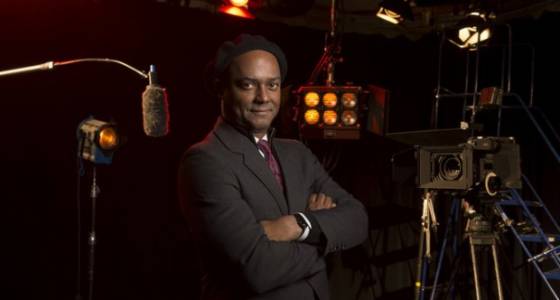 Before the evening is out, you might even see Peck at the podium, accepting the trophy for Best Documentary with his two fellow producers for "I Am Not Your Negro," a study of the writings of the late novelist, essayist and activist James Baldwin that has unexpectedly turned into an indie hit.

This past week, the 59-year-old Peck -- who works at RU-TV, Rutgers University's student-run television station, managing operations and mentoring students -- has been holed up in a hotel room in Los Angeles, preparing for the weekend's onslaught of black-tie affairs. In addition to the Oscar, "I Am Not Your Negro" will also be competing on Saturday for the Independent Spirit Award for Best Documentary.

"From the beginning this was never the goal," Peck says in a telephone interview earlier this week from his hotel room, "but I must say we we knew what we had ... We always felt we had something important."

"I Am Not Your Negro" is directed by Raoul Peck, Hebert's older brother. Both Pecks, along with another partner, Remi Grellety, produced the film, which hones in on published and unpublished writings by Baldwin, who died in 1987, to illuminate both the past and, uncomfortably, unforgettably, the present of racial prejudice and brutality.

What the Pecks probably didn't expect is that the film -- which played on the festival circuit last fall -- would tap so powerfully into a larger cultural zeitgeist. "I Am Not Your Negro" was released on Feb. 3, in the immediate aftermath of a roiling election season in which questions about race and cultural identity were at the forefront. In just three weeks of release, it has already grossed $3.5 million, playing on only 200 or so screens nationwide.

Near-universal rave reviews (the film has a 98% fresh rating on Rotten Tomatoes) have certainly helped its cause.

"Baldwin was talking about this, writing about this 40, 50 year ago," Peck says. "Today, in 2017, you feel as if he wrote this stuff this morning. It means on the one hand, what great insight, but also it makes you think about how much we have gone forward as a society. It lets us know we still have some ways to go."

Hebert Peck, the assistant director of broadcast operations RU-TV, is nominated for an Oscar for co-producing the documentary 'I Am Not Your Negro,' directed by his brother Raoul Peck. Nick Romanenko

The Peck brothers came of age during the American civil rights movement, but a continent away. Born in Haiti, Peck was a child when his parents and his two brothers moved to Zaire, now the Democratic Republic of Congo, after his agronomist father's jailing for attempting to unionize farmers during the brutal dictatorship of Francois "Papa Doc" Duvalier.

His parents sent their children to boarding school in France, and Peck arrived in the U.S. in 1974 to attend Ohio University in Athens and later Brooklyn College, where he studied psychology. (His parents stayed in Africa for 30 years but eventually settled in South Jersey. That's partly how Peck and his wife came to live in Voorhees.)

Peck's father had always been a camera and film hobbyist, and generously let his sons play with his Super 8 camera when they were young. After college, Hebert Peck worked with non-profits that served adults with disabilities, and he found a niche making training videos and soon realized that filmmaking was his calling.

He worked at a Philadelphia media arts center that trained emerging artists and later moved to Rutgers, where he was a senior producer at the university's iTV Studio and now is an assistant director of broadcast operations for RU-TV, all while pursuing his own commercial projects and working with his brother on "I Am Not Your Negro."

The film, in fact, has been in the works for years. Raoul Peck had long been drawn to the work of Baldwin ("Go Tell It On a Mountain," "The Fire Next Time"). The Baldwin estate had not been particularly open to granting rights to the writer's work, but Baldwin's executor, his younger sister Gloria Karefa-Smart, was fan of Raoul Peck's film about the assassinated Congolese prime minister Patrice Lumumba, and opened the archives to him about 10 years ago.

Four years later, Raoul Peck was still struggling with the project when Karefa-Smart slipped him a book proposal Baldwin had written in 1979 about the divergent philosophies and eventual assassinations of Medgar Evers, Malcolm X and Martin Luther King Jr., all friends of Baldwin. The book was never written, but the manuscript became the core of "I Am Not Your Negro."

There are no talking heads in the film, simply as much footage of Baldwin that could be found interspersed with clips from the civil rights struggle and more recent scenes of Black Lives Matter protests and their triggering incidents. Baldwin's prose is voiced by Samuel L. Jackson (in more meditative tones than his signature bluster) when there was no recording of Baldwin himself.

"His words are already so powerful and he's already so descriptive in his language," Peck says. "[Raoul] really wanted no filter between the audience and Baldwin."

The film is one of three documentaries nominated this year raking similar territory: "13TH," about the history of American slavery and mass incarceration, and "O.J.: Made in America," which views the rise and fall of O.J. Simpson through the lens of race. What makes this feat even more striking is that it comes just a year after the Academy endured widespread criticism for failing to nominate any actors of color for two consecutive years. (This year there are seven.)

Most Oscar prognosticators are predicting a victory for the "O.J." documentary, but "I Am Not Your Negro" has certainly been surging at the right moment -- an upset wouldn't be shocking. Regardless of whether it wins or not, Hebert Peck is clearly excited by the reception, and has plans to push the film out further in the world. Following the theatrical run, he will be organizing an outreach effort to bring the film to schools, churches and community centers -- and to boardrooms and police association halls. ("I Am Not Your Negro" will also air next season on PBS's "Independent Lens" series, though an airdate is yet to be set.)

"[The film] is for everyone," Peck says. "As Baldwin says himself, this is one country. This is one narrative. We need to make sure that we understand it as one narrative. We can't continue to have parallel stories of people's experiences in America. It's all tied to one story."