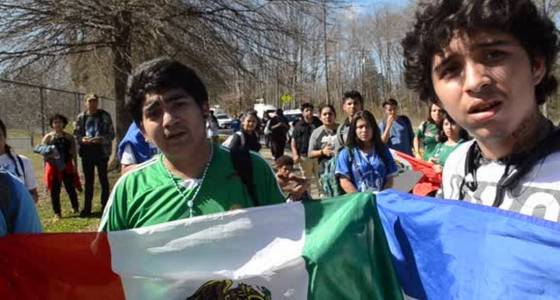 At Garinger High in east Charlotte, about 500 students held a morning protest in support of immigrants. Most returned to class, but about 100 walked seven miles along busy roads to Vance High, waving flags and chanting. Vance and four schools along the route were put on lockdown.

During the first round of protests on Feb. 17, a walkout at South Mecklenburg High got so unruly that school was dismissed early. Superintendent Ann Clark says the district is urging students and principals to work together to coordinate “peaceful protest,” though it’s unclear how schools are expected to avert trouble from students who go beyond the school-sanctioned action.

Clark said disorderly conduct “is not acceptable and will be handled compassionately but firmly” and urged parents to talk to students about “expressing themselves in appropriate and peaceful ways at school.”

Educators must act in a politically charged environment, where mass mobilizations happen quickly and events at school can be shared on social media before anyone sorts things out. And they know they have to think ahead, as the nation sees a steady stream of protests over issues ranging from immigration to LGBT and women’s rights to Black Lives Matter.

Last week Harding High Principal Eric Ward gave students his blessing for a pro-immigrant rally that drew about 500 students into the school quad on Feb. 17. Afterward they returned to class without incident.

“Yeah, I was worried about something happening,” Ward said Friday. But he says it’s better to work with students than to shut them down and risk more disruptive actions.

“If it’s adversarial between the students and the adults, you’re always going to be one step behind,” Ward said. “I see it all as part of civic responsibility.”

The latest round of protest was spurred by President Donald Trump’s orders to step up deportation of undocumented immigrants, including a wave of recent arrests in the Carolinas.

“We love our friends. We are afraid for them,” Garinger student Esbeida Mendez Diaz, who was born in Mexico, said Friday after marching to Vance High. “Nobody wants to listen to us. This is the only way people will listen to us.”

On Feb. 16, when thousands of people marched in uptown Charlotte as part of the national “Day Without an Immigrant” action, CMS saw absences rise by 16,000 over the previous day.

That evening, the word spread over social media that there would be school protests the next day, says Carmen Sosa, a sophomore at Harding High in west Charlotte. Soon after they arrived on Feb. 17, she and other students talked to Ward, who told them they’d need a plan and a sponsor.

The students recruited Spanish teacher Josept Rojas, adviser to the school’s Latino Alliance, who emailed other teachers, telling them what to expect. While the students rallied, Ward said he and other faculty circulated, keeping an eye out for potential troublemakers and telling them to move on.

“In order to have change, we need support from everybody,” Sosa said. “Nothing would be possible if it weren’t for our teachers and principal.”

Across town at South Mecklenburg High, which includes a number of immigrants among its 3,000-student population, Feb. 17 started with a peaceful walkout in support of immigrants and spun out of control as large numbers of others streamed out.

There was at least one fight, which required medical treatment, and one student who experienced an anxiety attack was taken by ambulance for treatment.

Anne Marie Haltiwanger, whose daughter is a freshman at South Meck, said she’s frustrated that parents have gotten no details about what happened and what the school is doing to prevent a recurrence. “The students need to fear walking out of the classroom,” she said.

Renee McCoy, another CMS spokeswoman, said this Friday’s walkout at Garinger started as a protest that the principal knew about, but changed when some students hit the streets. They reached Vance around noon, accompanied by police, and just before 1 p.m. a CATS bus took most of the students back to Garinger.

The CMS Code of Conduct says the maximum penalty for leaving school without permission is a two-day suspension, though milder penalties are also possible.

Kayla Romero, a former CMS teacher who heads Students For Education Reform, said her students held a hastily-called meeting Wednesday night to talk about last week’s actions and what comes next.

Some students felt comfortable working with their principals, she said, while others contended that “it’s not functioning as a tactic if it’s not interrupting something.”

“Otherwise there’s not much meaning to it,” she said. But she said even her students who rejected rule-bound protest wanted to maintain peace and safety.