Who Is Liable in a Highway Pileup?

There are few things more frightening than a highway pileup 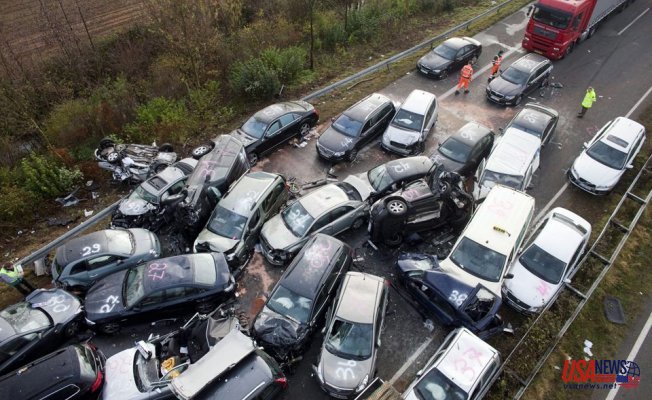 There are few things more frightening than a highway pileup. If you’ve ever been in even a small accident, you know how much damage can be done to you and your car. So, there’s more to be concerned about in an extreme situation like an accident involving several vehicles moving at high speed. The question of who is liable in a pileup can be a hard one to answer. There’s not always a clear, obvious choice. Each accident has to be taken on a case-by-case basis before a verdict can be announced.

One of the major players in pileups is the weather. Pileups happen more commonly in icy or snowy conditions. A skidding car without anyone else around it might not cause any problems. But it only takes an additional car or two to have a major accident that then leads to a pileup. As more cars approach, they will be unable to safely maneuver out of the way.

While we hope you never have to deal with a pileup situation, there are a few things you should know. The first is what to do in the event of a pileup. And the second is who is liable for the damages.

What to Do After a Pileup

So you’ve been caught in a pileup accident. From cracked bumper to cracked bumper, the cars are just lined up. While it may be tempting to get out and survey the damages, stay in your car until you know it is safe to leave. You never know when another distracted driver might miss you getting out of your car. In some cases, vehicles are carrying dangerous chemicals and you don’t know what could have spilt out. Call 9-1-1 and tell them what happened.

If you do determine it is safe to exit the vehicle, light some flairs and encourage other drivers to do the same. Outline the pileup so other motorists know to proceed with caution. If you don’t have flairs, hazard lights are a close second.

Once the police arrive, they will likely ask for everyone’s information during their interviews. Don’t try to assign blame just yet. It’s best to take that to the insurance companies.

Who Is Liable, Anyway?

In these situations, it’s best to leave this to the insurance companies to hash out. This is just another reason to make sure you’re fully covered and have excellent collision insurance. If you feel like your insurance company might not have your back in a difficult, no-fault case then start shopping around. You can get auto insurance quotes from most companies and compare the coverage they offer.

Of course, there are the more cut-and-dry cases where one of the drivers was impaired and therefore caused the accident. Maybe he or she was unable to react fast enough to a change in traffic speed. Perhaps they saw an obstruction on the road, or the car in front of them started braking suddenly. If they had been drinking, this could slow their reaction time. If a driver is found impaired at an accident site, it’s a much simpler case to parse out.

In another situation – that is seen all too commonly – the fault may fall to someone who feels they did nothing wrong. This is pileup where several cars are rear ended, no one is impaired, and the weather isn’t a factor. Usually, the front car is not held responsible for the accident unless it is proven that they were driving unsafely.

Even if they slammed on their brakes suddenly, the car following them should have left a proper space (or “cushion”) to avoid a serious crash. If the impact was from behind and pushed the second car into the first car, then the middle car is not liable unless there is an issue. For example, their brake lights were out.

Cases like these often require legal assistance to be settled and sometimes the fault is broken down into percentages. If car one slammed on their brakes and car two had broken tail lights then they both share the blame; even if car three was the one who caused the actual crash.

This is known as “comparative fault.” And while some people may not be happy with it, the truth is that we all assume a certain amount of risk and responsibility when we get behind the wheel of a car. Again, this is why having comprehensive insurance is so important; and why getting auto insurance quotes with a full rundown of coverage is in your best interest.

Pay Attention to Those Around You

Even the best driver in the world is only as safe as the people around them. Distracted drivers, sleep-deprived drivers, new and inexperienced drivers are always going to be on the road. Not to mention more insidious things like drivers operating under the influence.

Keeping yourself and your passengers safe can be tricky and sometimes an accident happens despite everyone doing the right thing. In these cases, stay calm, don’t accuse or accept blame, and be thankful that you’ve got great insurance to take care of you.