U.S. President Donald Trump's planned economic agenda has fanned the flames forWall Street's record-setting run, but some investors worry that his first major address to Congress next week risks dousing it if his plans look slow to execute... 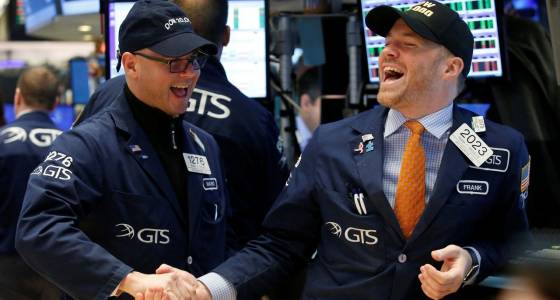 U.S. President Donald Trump's planned economic agenda has fanned the flames forWall Street's record-setting run, but some investors worry that his first major address to Congress next week risks dousing it if his plans look slow to execute or are overly vague.

The benchmark S&P 500 has surged 10 percent since Trump's Nov. 8 election, with optimism running high over the Republican administration's domestic proposals, including plans to reform taxes paid by businesses.

But there have been few specifics so far, and some investors believe Trump may need to provide more than just generalities when he gives his first major presidential address on Tuesday.

"If he comes out next week and there are little or no details other than that it is going to be great, that is going to be a time where we could have the first sort of crack in the armor," said JJ Kinahan, chief market strategist at TD Ameritrade in Chicago.

With stock valuations expensive, many market participants are bracing for a pullback. The S&P 500 is trading at nearly 18 times forward earnings estimates versus the long-term average of 15 times, according to Thomson Reuters data.

In Tuesday's speech, "the market wants to hear about concrete tax reform plans that have traction either across the Republican base or have the potential to reach across to moderate Democrats," said Alan Gayle, director of asset allocation with RidgeWorth Investments in Atlanta.

"If the market begins to doubt Trump’s ability to follow through on his promises, then I would think that we would see a 5 percent market correction fairly easily," Gayle said.

Investors are also watching for hints about timing of Trump's economic plans. U.S. Treasury Secretary Steven Mnuchin on Thursday laid out an ambitious schedule to enact tax relief by August.

"The one thing that could stall this rally would be any sort of indication that we won’t see the bulk of the effects this year," said Bruce McCain, chief investment strategist at Key Private Bank in Cleveland. "I think that would take some of the air out of the enthusiasm."

Investors will also be listening for comments about the border adjustment tax being pushed by Congressional Republicans, about which Trump spoke positively in a Reuters interview on Thursday after having previously sent mixed signals.

Ahead of Trump's address, the stock options market was not yet foreseeing a huge reaction to the speech, bracing for a move of 0.9 percent in either direction by Wednesday's close, according to pricing on at-the-money straddles on S&P 500 index options.

Investors appeared to show comfort wading into the stock market, according to Lipper data released on Thursday, with U.S.-based stock funds attracting $2.7 billion in the latestweekly period, their fourth consecutive week of inflows.

However, one high-profile investor, Jeffrey Ubben of activist investor ValueAct Capital, told Reuters on Wednesday that his firm had been taking money out of the capital markets as valuations have become overextended.

Beyond tax reform, investors will be eager to learn more about Trump's plans for repealing the Affordable Care Act, reducing regulations on businesses and increasing infrastructure spending.

Just this week, shares of engineering and construction companies gave up some of their post-election gains on concerns Trump's infrastructure package would be put off until next year.

But while some investors are eager for policy specifics, the bigger picture is the change in the White House, said Bruce Bittles, chief investment strategist at Robert W. Baird & Co in Sarasota, Florida.