NEW YORK—Valeant Pharmaceuticals International Inc.’s turnaround still has a long way to go.The drugmaker reported a sharp drop in sales last quarter, and still has $30 billion (U.S.) in debt hanging over its balance sheet that can only be dealt... 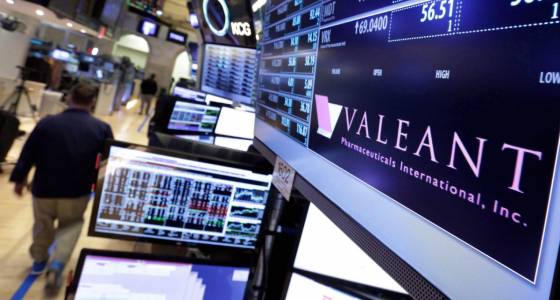 The drugmaker reported a sharp drop in sales last quarter, and still has $30 billion (U.S.) in debt hanging over its balance sheet that can only be dealt with by selling assets or improving cash flow. On Tuesday, Valeant said that sales and profit this year will decline further, sending its shares and bonds down.

Even that drab forecast didn’t satisfy one analyst. “It still doesn’t appear that management has a realistic outlook on its organic growth,” Irina Koffler, of Mizuho Securities, said in a note to clients. She cut her price target on the shares to $9.

A key measure to chief executive officer Joe Papa’s efforts to turn around the drugmaker will be his ability to reduce the massive debt burden. He announced two deals worth $2.1 billion combined in one day in January, an important first step in his endeavour to get cash — but not enough to drastically lower the liabilities. On a call with analysts, he said the company’s in the process of divesting assets in non-core regions such as Vietnam, Indonesia and Brazil.

Valeant’s management doesn’t anticipate being in violation of the terms of its debt agreements this year. Based on its guidance, Valeant has a $200-million-to-$350-million cushion to remain compliant on its debt, according to Evercore ISI analyst Umer Raffat. Still, executives are considering their options to extend maturities and seek financial flexibility.

“I can’t get more specific in terms of timing or what we intend to do, but I would assure you that keeping an eye on the capital markets and moving quickly to address some of these issues is very high on our list,” chief financial officer Paul Herendeen said on a call with analysts, citing debt that will be due for repayment in 2018 and 2020.

Another challenge for management is the loss of exclusivity or competition for a number of treatments in early 2017. They include some of the higher-priced products that thrust the drugmaker into the spotlight in 2015, when Valeant became the target of public and political outrage in the U.S. for hiking up prices of old drugs just after buying them. Papa, who took over in May last year, had to cut Valeant’s forecasts twice in 2016 as sales deteriorated.

Valeant debt dropped as much as 2.25 cents on the dollar on Tuesday.

Shares of the company, which has headquarters in Laval, Que., had rebounded 15 per cent this year as of Monday’s close. They were still worth a fraction of their August 2015 peak of $262.52 and below their levels when Papa joined.

News that Valeant had decided to keep its Salix gastrointestinal-drugs division after talks to sell the unit fell apart had sent the shares tanking on Nov. 30, as investors were disappointed that Papa couldn’t pull off a major asset sale. The drugmaker has since hired 250 salespeople at Salix, considered one of Valeant’s crown jewels with products such as gastrointestinal treatment Xifaxan and constipation treatment Relistor.

The gastrointestinal, or GI, business will grow modestly this year, executives said on the call. The unit “lost some momentum” in the fourth quarter after the failed sale, but it will be back on track later this year, CEO Papa told analysts.

“We expect to regain our footing in GI in the latter part of 2017, especially as the primary care sales force ramps up its productivity,” he said.

For 2017, Valeant sees earnings before interest, taxes, depreciation and amortization of $3.55 billion to $3.70 billion. Analysts anticipated $3.9 billion, on average. Sales will be $8.90 billion to $9.10 billion, down from $9.67 billion last year, the company said. CFO Herendeen said on the call that the guidance is “skewed toward the conservative side.”