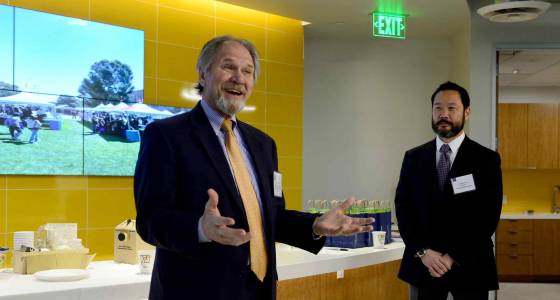 Six weeks before classes start at the UCLA Extension’s new Woodland Hills Warner Center campus, university officials opened the doors of its dozen classrooms Thursday for a walk-through by the general public.

“This looks great,” said Wayne Smutz, dean of Continuing Education and UCLA Extension for the UCLA. “We’re anxious to serve the people in the Valley.

“We have started with a broad array of courses and will later tailor the program to what the students need.”

The UCLA Extension Woodland Hills campus comes a decade after the university pulled its continuing education center out of Universal CityWalk because of low enrollment.

But times have changed, UCLA Extension officials say. Of the 40,000 students enrolled in its more than 5,000 courses for 170 professional certificates from business to entertainment, many commute from the Valley to its Westwood or downtown campuses.

So instead of students having to slog through traffic to get to school, the school decided to move closer to students. And studies showed that Woodland Hills was first of five locations across Los Angeles in terms of current extension student demographics — 25 to 40 years old, employed and looking to change or advance in their careers, Smutz said.

Enrollment is now open for up to 75 classes at UCLA Extension Woodland Hills at Warner Center Tower III, 21650 Oxnard St., Suite 200, with discounts of up to 15 percent. Go to uclaextension.edu/wh.

The spring quarter begins April 3, with courses ranging from History of Environmental Arts to Introduction to Novel Writing. Classrooms will hold up to 360 students.

Blumenfield was among a dozen chamber of commerce and business leaders on the morning tour.

“This is bringing education opportunities to the Valley,” he said. “It’ll really serve the community.”

On Thursday, university officials guided guests through a dozen high-tech classrooms with large TVs and video conferencing that take up much of the second floor of the AIG building, with tree-lined views onto the Promenade mall, which is now slated for redevelopment.

Slate blue and ochre touches throughout the nearly 1,300-square-foot campus echoed the Bruins’ blue and gold, with a video panel tribute to the late legendary basketball coach John Wooden of Encino.

“I bleed blue,” said Eric Matsuura,who manages UCLA’s Extension facilities. “We selected Warner Center because it’s such a hot place … with access to the freeway, parking and food.”

Business leaders said the UCLA campus could raise the profile of the west San Fernando Valley.

“It’s good for business … (and) terrific for the local economy.”