Uber’s CEO apologizes for arguing with his own driver

Uber’s CEO has apologized after a video emerged of him in a shouting match with a driver for his ride-hailing company in which the honcho said, “Some people don’t like to take responsibility for their own s–t.”“By now I’m sure you’ve seen... 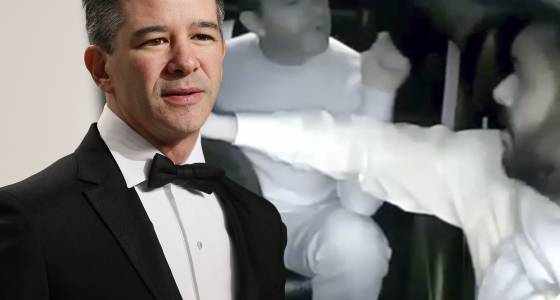 Uber’s CEO has apologized after a video emerged of him in a shouting match with a driver for his ride-hailing company in which the honcho said, “Some people don’t like to take responsibility for their own s–t.”

“By now I’m sure you’ve seen the video where I treated an Uber driver disrespectfully. To say that I am ashamed is an extreme understatement,” Travis Kalanick wrote Tuesday night in a note to his 11,000 employees.

“My job as your leader is to lead…and that starts with behaving in a way that makes us all proud. That is not what I did, and it cannot be explained away,” he wrote.

“It’s clear this video is a reflection of me—and the criticism we’ve received is a stark reminder that I must fundamentally change as a leader and grow up. This is the first time I’ve been willing to admit that I need leadership help and I intend to get it.”

He said he wanted to “profoundly apologize” to the app hack, Fawzi Kamel, and to his entire team.

A dash-cam video first published by Bloomberg caught the verbal altercation in San Francisco between Kalanick and Kamel, who was irate over plunging prices and lower pay.

He said changes in Uber’s business models hurt him in the pocket.

“Bulls—,” replied Kalanick, 40, who blamed Kamel for his own woes.

“You know what? Some people don’t like to take responsibility for their own s—,” Kalanick snapped before slamming the door. “They blame everything in their life on someone else.”

Kamel, 37, who is a driver for Uber’s luxury service – Uber Black — did not appear to be satisfied by Kalanick’s mea culpa.

“Uber kept dropping prices every season to gain more ridership to satisfy their growth, and it didn’t matter to Uber if the driver is not even making minimum wage,” he told NBC News. “And the worst part is, they call us partners, [but] they make the rules, set the price and they even choose the cars you can use.”

He said veteran drivers for Uber Black should be treated with more respect because of their investment in high-end vehicles.

The blowup comes during a rough patch for the San Francisco-based company.

In January, more than 200,000 irate customers deleted the Uber app and launched the #DeleteUber campaign when the company sent cars to JFK Airport, where some travelers were being detained during President Trump’s travel ban. The taxi industry boycotted, meanwhile.

Last week, the company hired former US Attorney General Eric Holder to review of sexual harassment claims made by a former employee.

The company also has been beset by issues involving self-driving cars.

In December, it was forced to pull a fleet of such cars from San Francisco a week after deployment.

The California Department of Motor Vehicles determined the service was illegal because Uber didn’t have an autonomous vehicle license, The Washington Post reported.

But one of Uber’s autonomous Volvos was caught on video as it ran a red light. The company claimed human error caused the incident — as every car in the fleet also had drivers onboard in case of emergencies, the paper reported.

Later, internal documents obtained by the New York Times showed the problem was due to an error in the car’s programming.

“The mapping programs used by Uber’s cars failed to recognize six traffic lights in the San Francisco area,” one of the documents said.

And Uber is being sued by Google’s self-driving car division, which alleges one of its former engineers downloaded 14,000 files before leaving to start his own self-driving car company that was later acquired by Uber, NBC news reported.