When Uber Chief Executive Officer Travis Kalanick takes an Uber, he prefers a black car, the high-end service his company introduced in 2010. On this particular night in early February-Super Bowl Sunday-Kalanick is perched in the middle seat, flanked by two... 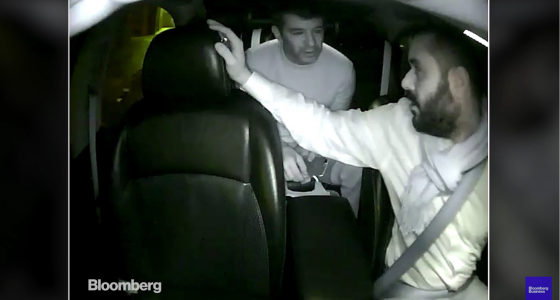 When Uber Chief Executive Officer Travis Kalanick takes an Uber, he prefers a black car, the high-end service his company introduced in 2010. On this particular night in early February-Super Bowl Sunday-Kalanick is perched in the middle seat, flanked by two female friends. Maroon 5's "Don't Wanna Know" plays, and Kalanick shimmies. He clutches his smartphone as the three make awkward conversation. The two women ask when his birthday is, and marvel that he's a Leo. One of his companions appears to say, somewhat inaudibly, that she's heard that Uber is having a hard year. Kalanick retorts, "I make sure every year is a hard year." He continues, "That's kind of how I roll. I make sure every year is a hard year. If it's easy I'm not pushing hard enough."

There's no question that it's been a hard year for Kalanick and Uber-or really, a bad year compressed down into an awful three months. And it keeps getting worse. That pleasant conversation between Kalanick and his friends in the back of an Uber Black? It devolved into a heated argument over Uber's fares between the CEO and his driver, Fawzi Kamel, who then turned over a dashboard recording of the conversation to Bloomberg.

Kamel, 37, has been driving for Uber since 2011 and wants to draw attention to the plight of Uber drivers. The video shows off Kalanick's pugnacious personality and short temper, which may cause some investors to question whether he has disposition to lead a $69 billion company with a footprint that spans the globe.

To say that I am ashamed is an extreme understatement. My job as your leader is to lead…and that starts with behaving in a way that makes us all proud. — Uber CEO Travis Kalanick

After the video went public, Kalanick issued a statement to Uber employees. In it, he says he must "grow up" and apologizes to the driver, identified as Fawzi Kamel, as well as the driver community.

" To say that I am ashamed is an extreme understatement. My job as your leader is to lead…and that starts with behaving in a way that makes us all proud. That is not what I did, and it cannot be explained away," he said.

"This is the first time I've been willing to admit that I need leadership help and I intend to get it," he said.

In December, Uber pulled its self-driving cars off the road in San Francisco after the California Department of Motor Vehicles said they were operating illegally without an autonomous vehicle license. In January, more than 200,000 people uninstalled their accounts, and #DeleteUber trended on Twitter, after the company was accused of undermining a New York taxi union strike protesting President Donald Trump's refugee ban.

On Feb. 2, Kalanick reluctantly left his spot on Trump's business advisory council to appease the company's liberal-leaning employees and users-not to mention its many immigrant drivers. On Feb. 19, a former software engineer at Uber wrote a blog post alleging that she had been propositioned for sex by her manager and that when she'd taken the issue to human resources, an HR rep had said that he wouldn't be punished, in part, because he was a "high performer." On Feb. 23, Alphabet's autonomous car company Waymo sued Uber and its self-driving car company Otto, accusing an Uber employee of stealing trade secrets by downloading 14,000 files onto an external hard drive.

On Monday, Uber's head of engineering resigned after the company said it learned that he had faced a sexual harassment complaint at Alphabet, his former employer. He denied the allegations.

The company has responded to the former engineer's allegations by hiring the former U.S. attorney general Eric Holder to investigate the female software engineer's claims. "What's described here is abhorrent & against everything we believe in. Anyone who behaves this way or thinks this is OK will be fired," Kalanick wrote on Twitter. On Waymo's claims that Uber has stolen trade secrets, an Uber spokeswoman said, "We have reviewed Waymo's claims and determined them to be a baseless attempt to slow down a competitor, and we look forward to vigorously defending against them in court."

Despite it all, Uber's business is growing, week after week. This is the service that Kalanick and his friend, Garrett Camp, dreamed up. Get a car in an instant, just like James Bond. They weren't the first people to have that idea, but they were the ones who won-or at least the ones who have gotten the furthest. Camp stepped back and became chairman of the board, while Kalanick turned Uber into a global endeavor that operates in more than 400 cities. The company, which has its headquarters on Market Street in San Francisco, has more than 11,000 corporate employees. It has many more drivers-millions of them, scattered all over the world, working as independent contractors, without the health care and other benefits typically provided to full-time employees.

And the gig has gotten harder for longtime drivers. In 2012, Uber Black cost riders $4.90 per mile and $1.25 per minute in San Francisco, according to an old version of Uber's website. Today, Uber charges $3.75 per mile and $0.65 per minute. Black car drivers get paid less and their business faces far more competition from other Uber services.

In the past month, the San Francisco ride-hailing firm faced a customer boycott and sexual harassment allegations, which have devastated employee morale and steered users away from the service. Then it was slapped with a lawsuit Thursday, in which Waymo — Google’s...

In the past month, the San Francisco ride-hailing firm faced a customer boycott and sexual harassment allegations, which have devastated employee morale and steered users away from the service. Then it was slapped with a lawsuit Thursday, in which Waymo — Google’s...

Kalanick has a reputation for being ferociously competitive and hard-charging. He's the guy who has bragged about having earned the second-highest rank on Nintendo's Wii tennis game. He's still dogged by the fact that he once referred to Uber as "Boob-er" because it improved his dating prospects. Current and former employees say he can be empathetic when the mood strikes-or tyrannical when it doesn't. Kalanick loves fighting over a good idea, which sometimes means admitting that his isn't the best one. "Toe-stepping" is one of Uber's cultural values.

Kalanick is trying to be a better listener. He met with more than 100 of Uber's female employees last week to address the morale crisis that followed the former software engineer's blog post. Kalanick sounded some of the right notes, standing in front of the crowd. "There are people in this room who have experienced things that are incredibly unjust," he said, according to a recording obtained by Buzzfeed. "I empathize with you, but I can never fully understand, and I get that. I want to root out the injustice. I want to get at the people who are making this place a bad place, and you have my commitment to make that happen, and I know it doesn't end there."

Like Facebook's Mark Zuckerberg before him, Kalanick is trying to learn how to empathize and communicate. But Kalanick at 40, compared with 32-year-old Zuckerberg, is having to change his ways later in life, and he's often reluctant to tread too far from his intuitions. Even when Kalanick tries to empathize in his own way-which often means jumping into a dialectical argument of sorts- his temper can occasionally flare.

In Kamel's car, for example, Kalanick is seemingly at ease as the ride ends and his friends hop out of the car.

"You have a good one," says the driver.

Kalanick says with an air of familiarity, "Good to see you man."

Kamel replies, "Good to see you, too."

Kalanick thinks the ride is over. But having the CEO in his car is an opportunity Kamel has been waiting for.

"I don't know if you remember me, but it's fine," Kamel says. The pair begin talking shop, and Kalanick explains that they're going to cut down on the number of black cars, which will reduce competition and should be good for Kamel.

Then Kamel says what every driver has been dying to tell Kalanick: "You're raising the standards, and you're dropping the prices."

Kalanick: "We're not dropping the prices on black."

Kamel: "But in general the whole price is-"

Uber CEO Travis Kalanick has quit President Donald Trump's council of business leaders, according to an internal memo obtained by The Associated Press.

Kalanick wrote to his employees that he'd spoken with Trump on Thursday to "let him know that I would not be able to participate on his economic...

Uber CEO Travis Kalanick has quit President Donald Trump's council of business leaders, according to an internal memo obtained by The Associated Press.

Kalanick wrote to his employees that he'd spoken with Trump on Thursday to "let him know that I would not be able to participate on his economic...

Kalanick: "We have to; we have competitors; otherwise, we'd go out of business."

Kamel: "Competitors? Man, you had the business model in your hands. You could have the prices you want, but you choose to buy everybody a ride."

Kamel: "What? Lyft? It's a piece of cake right there."

Kalanick: "It seems like a piece of cake because I've beaten them. But if I didn't do the things I did, we would have been beaten, I promise."

The two bat that idea around, and Kamel brings the conversation back to his losses.

Kamel: "You changed the whole business. You dropped the prices."

Kalanick begins to lose his temper. "Bullshit," he says.

Kalanick: "You know what?"

Kalanick: "Some people don't like to take responsibility for their own s--t. They blame everything in their life on somebody else. Good luck!"

The door slams. Kamel drives away. Later, the Uber driver app prompts him to rate Kalanick, as he does all his riders. Kamel gives him one star.