Dubai: The Dubai Financial Market General Index (DFMGI) was down 16.85 or 0.46 per cent last week to end at 3,633.91. Market breadth was bearish with 19 declining issues and 11 advancing, while volume fell slightly below the level of the prior week.Even though... 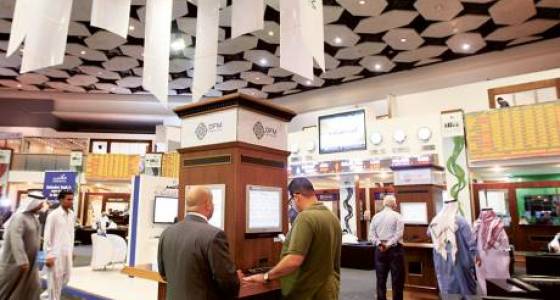 Dubai: The Dubai Financial Market General Index (DFMGI) was down 16.85 or 0.46 per cent last week to end at 3,633.91. Market breadth was bearish with 19 declining issues and 11 advancing, while volume fell slightly below the level of the prior week.

Even though the index was down for the week it made a decent recovery after falling as much as 2.7 per cent at the week’s low of 3,551.01 reached on Tuesday. That decline gave bearish signals. However, the week ended with the DFMGI in the top quarter of the week’s price range, a short-term bullish sign. Bearish signals earlier in the week included a breakdown of a relatively narrow six-week consolidation phase on a move below 3,608.40, and a drop below the 55-day exponential moving average (ema), which is now at 3,615.50.

A relatively sharp rally occurred off the week’s low (at the 21-week ema) on Wednesday. Therefore, the 21-week ema is a key trend indicator to watch for support in the future. If last week’s low holds during future weakness then it is a key component of the price structure of the three-month uptrend (higher swing low) and possibly the 13-month uptrend.

It remains to be seen whether last week’s short-term bullish behaviour (decisive weakness earlier in the period reversing to strength by the end) will be sustainable and allow the recent highs to be challenged in the foreseeable future. Resistance at the recent highs is from approximately 3,720 to 3,738.69 (top of six-week consolidation range). The first barrier to exceed will be last week’s high of 3,656.76.

Given last week’s recovery the index is already inside the six-week consolidation pattern which is resistance zone. A break above last week’s high puts the DFMGI further up into the pattern. Upward momentum will have to increase for the index to have enough strength to then breakout to a new high — above 3,738.69. The more likely short-term scenario is that the consolidation phase extends.

The Abu Dhabi Securities Exchange General Index (ADI) was up only slightly last week, increasing by 10.18 or 0.22 per cent to end at 4,653.39. This is the second week in a row where the ADI was up while the DFMGI was down, and is one indication of its relative strength. There were 11 advancing issue and 22 declining, while volume crept a little higher to a four-week high.

There were other signs of technical strength. The week’s high-to-low price range confirmed an uptrend with a new higher high and higher low (uptrend definition), plus the week ended above the prior week’s close and at a five-week weekly closing high. In addition, support for the week was seen at 4,571.18, right around the 21-day ema. Over five days earlier in the month the 21-day ema represented resistance. Last week’s bounce confirms that it is now representing support, a bullish sign.

Next, watch for the ADI to exceed and close above last week’s 4,666.68 high to give the next sign of strengthening. It then needs to break above the recent 4,715.05 peak (2017 high) to indicate the move might be sustained in the near-term. A daily close above that peak signals a bullish trend continuation of both the 14-week uptrend and 13-month uptrend. At that point the ADI would next be targeting the 4,902.09 peak from July 2015.

Alternatively, resistance may be seen anywhere from last week’s high up to the 2017 high. Support is around the 21-day ema, now at 4,595.38, and last week’s low of 4,571.18. If last week’s low is exceeded to the downside then a deeper pullback is in the works.

Dubai Investments has been consolidating for the past seven weeks within a relatively narrow price range. Resistance of the range is at 2.63 and support at 2.44. Last week the stock was up 0.79 per cent to close at 2.55.

This consolidation phase follows a sharp eight-week rally starting in November that saw the stock jump over 38 per cent, from a low of 1.90 to a high of 2.63. That’s the highest price since August 2015.

Such a strong move followed by a relatively minor pullback and consolidation is frequently followed by another rally. This seems likely in this case given that the eight-week rally triggered a breakout of the long-term downtrend line in late-November and the stock subsequently closed above the prior swing high of 2.49 from April of last year. Each of those signals points to an eventual continuation of the uptrend that began from the January 2016 low of 1.48.

It’s not clear wether Dubai Investments will pullback further off recent highs before making another run higher. So far over the past six weeks weakness has found support at or a little above 2.44. The pullback has been normal and minor, which may reflect underlying strength. Regardless, a decisive drop below that price level increases the chance for a deeper retracement.

Given the overall bullish nature of the rally off the November low and minor retracement since then an upside breakout should present an opportunity. An upside breakout and bullish trend continuation signal is triggered on a move above 2.63. The next main target zone would then be from around 3.05 to 3.20.

Bruce Powers, CMT, is chief technical analyst at www.MarketsToday.net. He is based in Dubai.