Trump’s trade czar expected to get easy US Senate confirmation

WASHINGTONBillionaire investor Wilbur Ross is expected to be easily confirmed as US. Commerce Secretary on Monday, clearing President Donald Trump’s top trade official to start work on renegotiating trade relationships with China and Mexico.The vote will... 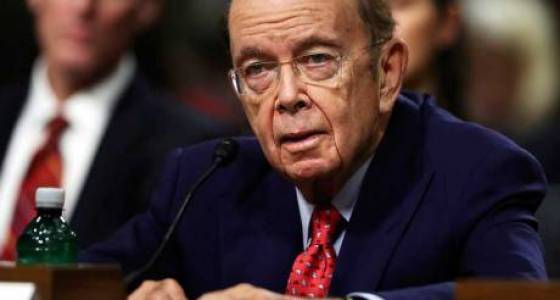 The vote will insert a major new voice into Trump’s economic team, one that strongly influenced his criticism of the North American Free Trade Agreement and a now-scrapped Asia-Pacific trade deal.

Ross’ nomination is scheduled for a vote on Monday at around 7pm (0000 GMT). It was advanced by the Senate in a 66-31 procedural vote on Feb. 17, signalling solid support from Democrats.

Part of that support stems from praise that Ross has drawn from the United Steelworkers union for his efforts in restructuring several bankrupt steel companies in the early 2000s, saving numerous plants and thousands of jobs.

But he also has come under criticism from some left-wing groups as another billionaire in a Trump cabinet that claims to be focused on the working class, and for being a “vulture” investor who has eliminated jobs. Reuters reported last month that Ross’s companies have shipped some 2,700 jobs overseas since 2004.

The 79-year-old investor will oversee a sprawling agency with nearly 44,000 employees responsible for combating the dumping of imports below cost into US markets, collecting census and critical economic data, weather forecasting, fisheries management, promoting the United States to foreign investors and regulating the export of sensitive technologies.

While Commerce secretaries rarely take the spotlight in Washington, Ross is expected to play an outsize role in pursuing Trump’s campaign pledge to slash US trade deficits and bring manufacturing jobs back to America.

Trump has designated Ross to lead the renegotiation of NAFTA with Mexico and Canada, a job that in past administrations would have been left to the US. Trade Representative’s office.

Ross will join other major players on the economic team, including US. Treasury Secretary Steven Mnuchin and Gary Cohn, director of the White House National Economic Council.

Some experts said Ross could serve as a counterweight to advisers such as Peter Navarro, the University of California-Irvine economics professor who heads Trump’s newly created White House National Trade Council. Navarro has advocated a controversial 45 per cent across-the-board tariff on imports from China that Trump threatened during his campaign.

“I expect that Ross will quickly become the administration’s chief trade spokesman, and that Navarro’s influence will be felt indirectly, rather than through public statements or testimony,” said Gary Hufbauer, a senior fellow and trade expert at the Peterson Institute for International Economics.

At his confirmation hearing, Ross downplayed chances of a trade war with China, while calling it the “most protectionist” large economy. He vowed to level the playing field for US companies competing with Chinese imports and those trying to do business in China’s highly restricted economy.

Ross, estimated by Forbes to be worth $2.9 billion (Dh10.65 billion), built his fortune in the late 1990s and early 2000s by investing in distressed companies in steel, coal, textiles and auto parts, restructuring them and often benefiting from tariff protections put in place by the Commerce Department.