Olathe, Kansas: President Donald Trump opened his address to a joint session of Congress by condemning the recent threats against Jewish community centers and a fatal shooting in Kansas being investigated as a hate crime.Trump on Tuesday said that “while... 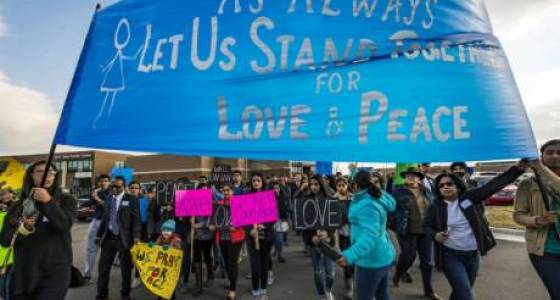 Olathe, Kansas: President Donald Trump opened his address to a joint session of Congress by condemning the recent threats against Jewish community centers and a fatal shooting in Kansas being investigated as a hate crime.

Trump on Tuesday said that “while we may be a nation divided on policies, we are a country that stands united in condemning hate and evil in all its forms”.

The president had received criticism from some civil rights groups who accused him of being slow in denouncing the violent acts. He had yet to discuss the killing of Srinivas Kuchibhotla, one of two Indian men shot inside a bar in Olathe, Kansas.

There have also been dozens of threats against Jewish community centers — and vandalism in Jewish cemeteries — across the nation in recent weeks.

The FBI is confirming for the first time that it is investigating last week’s Kansas bar shooting as a hate crime.

The FBI said in a statement Tuesday that it bases that probe on “the initial investigative activity” involving the February 22 attack at Austins Bar and Grill in Olathe, Kansas.

The FBI is declining additional comment, citing the investigation.

Witnesses to the shooting said 51-year-old suspect Adam Purinton yelled “get out of my country” at 32-year-olds Srinivas Kuchibhotla and Alok Madasani before opening fire.

Kuchibhotla was killed and Madasani was wounded. Both were working as engineers for GPS device-maker Garmin.

Another bar patron who tried to intervene also was wounded.

Purinton is charged with murder and attempted murder.

Brownback spokeswoman Melika Willoughby said the meeting will take place later this week. She said Brownback and Colyer plan to express their condolences and express their support for the Indian community.

Willoughby did not provide further details about the meeting in an email Monday evening.