Eric Pusey has to bite his tongue when customers at his pharmacy cough up co-payments far higher than the cost of their low-cost generic drugs, thinking their insurance is getting them a good deal. Pusey's contracts with drug-benefit managers at his Medicap... 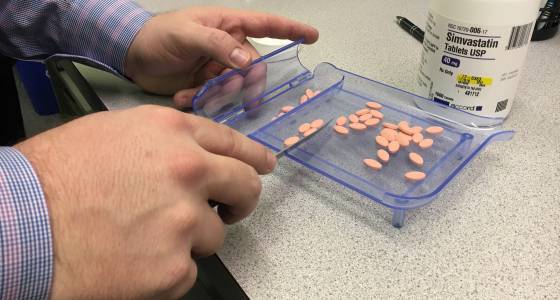 Eric Pusey has to bite his tongue when customers at his pharmacy cough up co-payments far higher than the cost of their low-cost generic drugs, thinking their insurance is getting them a good deal.

Pusey's contracts with drug-benefit managers at his Medicap Pharmacy in Olyphant, Pennsylvania, bar him from volunteering the fact that for many cheap, generic medicines, co-pays sometimes are more expensive than if patients simply pay out of pocket and bypass insurance. The extra money -- what the industry calls a clawback -- ends up with the benefit companies. Pusey tells customers only if they ask.

Clawbacks, which can be as little as $2 a prescription or as much as $30, may boost profits by hundreds of millions for benefit managers and have prompted at least 16 lawsuits since October. The legal cases as well dozens of receipts obtained by Bloomberg and interviews with more than a dozen pharmacists and industry consultants show the growing importance of the clawbacks.

"It's like crack cocaine," said Susan Hayes, a consultant with Pharmacy Outcomes Specialists in Lake Zurich, Illinois. "They just can't get enough."

The cases arrive at a critical juncture in the quarter-century debate over how to make health care more affordable in America. President Donald Trump is promising to lower drug costs, saying the government should get better prices and the pharmaceutical industry is "getting away with murder."

The Pharmaceutical Care Management Association, a benefits-manager trade group, says it expects greater scrutiny over its role in the price of medicine and wants to make its case "vocally and effectively."

Suits have been filed against insurers UnitedHealth Group Inc., which owns manager OptumRx; Cigna Corp., which contracts with that manager; and Humana Inc., which runs its own. Among the accusations are defrauding patients through racketeering, breach of contract and violating insurance laws.

"Pharmacies should always charge our members the lowest amount outlined under their plan when filling prescriptions," UnitedHealthcare spokesman Matthew Wiggin said in a statement. "We believe these lawsuits are without merit and will vigorously defend ourselves."

"Patients should not have to pay more than a network drugstore's submitted charges to the health plan," Charles Cote, a spokesman for the Pharmaceutical Care Management Association, said in a statement.

Benefit managers are obscure but influential middlemen. They process prescriptions for insurers and large employers that back their own plans, determine which drugs are covered and negotiate with manufacturers on one end and pharmacies on the other. They have said their work keeps prices low, in part by pitting rival drugmakers against one other to get better deals.

The clawbacks work like this: A patient goes to a pharmacy and pays a co-pay amount -- perhaps $10 -- agreed to by the pharmacy benefits manager, or PBM, and the insurers who hire it. The pharmacist gets reimbursed for the price of the drug, say $2, and possibly a small profit. Then the benefits manager "claws back" the remainder. Most patients never realize there's a cheaper cash price.

"There's this whole industry that most people don't know about," said Connecticut lawyer Craig Raabe, who represents people accusing the companies of defrauding them. "The customers see that they go in, they are paying a $10 co-pay for amoxicillin, having no idea that the PBM and the pharmacy have agreed that the actual cost is less than a dollar, and they're still paying the $10 co-pay."

On Feb. 10, a customer at an Ohio pharmacy paid a $15 co-pay for 15 milligrams of generic stomach medicine pantoprazole that the pharmacist bought for $2.05, according to receipts obtained by Bloomberg. The pharmacist was repaid $7.22, giving him a profit of $5.17. The remaining $7.78 went back to the benefits manager.

Clawbacks are possible because benefit managers take advantage of an opaque market, said Hayes, the Illinois consultant. Only they know who pays what.

In interviews, some pharmacists estimate clawbacks happen in 10 percent of their transactions. A survey by the more than 22,000-member National Community Pharmacists Association found 83 percent of 640 independent pharmacists had at least 10 a month.

"I've got three drugstores, so I see a lot of it," David Spence, a Houston pharmacist, said in an interview. "We look at it as theft -- another way for the PBMs to steal."

Lawsuits began in October in multiple states, and some have since been consolidated. Most cite an investigation by New Orleans television station Fox 8, which featured interviews with Louisiana pharmacists whose faces and voices were obscured.

Many plans require pharmacies to collect payment when prescriptions are filled and prohibit them from waiving or reducing the amount. They can't even tell their customers about the clawbacks, according to the suits. Contracts obtained by Bloomberg prohibit pharmacists from publicly criticizing benefit managers or suggesting customers obtain the medication cheaper by paying out of pocket.

Pharmacists who contract with OptumRx in 2017 could be terminated for "actions detrimental to the provider network," doing anything that "disparages" it or trying to "steer" customers to other coverage or discounted plans, according to an agreement obtained by Bloomberg.

OptumRx is among the three largest benefit managers that combine to process 80 percent of the prescriptions in the U.S. The other two, Express Scripts Holding Co. and CVS Caremark, haven't been accused of clawbacks. CVS doesn't use them, it said in a statement. Express Scripts is so opposed that it explains the practice on its website and promises customers will pay the lowest price available.

Pharmacies fear getting removed from reimbursement networks, a potential death blow in smaller communities. But some pharmacists jump at opportunities to inform customers who question their co-pay amounts.

"Most don't understand," said Spence, who owns two pharmacies in Houston. "If their co-pay is high, then they care."

States are responding. Last year, Louisiana began allowing pharmacists to tell customers how to get the cheapest price for drugs, trumping contract gag clauses. In 2015, Arkansas prohibited benefit managers and pharmacies from charging customers more than the pharmacy will be paid.

"The consumers don't know what's going on," said Steve Nelson, a pharmacist in Okeechobee, Florida. "We try to educate them with regards to what goes into a prescription, OK? You've got to kind of tip-toe around things."