Dubai: Lesser-known stories behind some of the world’s top scientific discoveries and inventors were shared during a Nobel Museum presentation in Dubai on Sunday.Albert Einstein, for example, conceived the idea of his famous theory of relativity while... 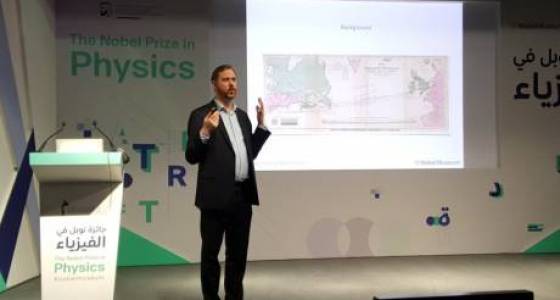 Dubai: Lesser-known stories behind some of the world’s top scientific discoveries and inventors were shared during a Nobel Museum presentation in Dubai on Sunday.

Albert Einstein, for example, conceived the idea of his famous theory of relativity while working as a young Swiss patent office assistant — not as an “eccentric, weird-haired” elderly scientist, as commonly perceived.

In fact, Einstein didn’t win a Nobel Prize for his work on the special relativity theory — which some members of the prize committee reportedly didn’t even understand or agree with — but for his discovery of the law of the photoelectric effect, in 1921.

These and other insights came during Sunday’s presentation by Olof Somell, assistant curator at the Nobel Museum in Sweden, who discussed some Nobel Prize-awarded breakthroughs in physics.

The event, titled “A Century of Nobel Physics: Science Changing the World”, was organised by the Mohammad Bin Rashid Al Maktoum Knowledge Foundation at the Children’s City in Dubai Creek Park.

The presentation was attended by dozens of school students in a packed hall at the venue.

Somell also described how the world’s first trans-Atlantic wireless communication, in 1901, was carried out at night to avoid radiation interference from the sun. What is also interesting is that the communication was done using pre-existing technology.

“Everything was already there, but he [Italian engineer Guglielmo Marconi] did it; he made it actually work. And he received the Nobel Prize in 1909 … He is the one who put everything together — the theories and the devices — and made something usable.”

Somell went on to describe how Charles Kao, known as the “father of fibre optics”, was turned down by a major company is his quest for support for his research, with sceptics insisting glass could not be made clear enough to transmit long-distance communication.

By the time Kao won the Nobel Prize in 2009, tens of thousands of kilometres of conventional undersea cables had been replaced by fibre optics for broadband communications.